Red Tiger Gaming has been on a roll lately, belting out one slot game after another. For the festive season, this software provider created a slot game with a nativity theme, just in time for Christmas.

The Christmas season might now be behind us, but this slot game will have you jingle all the way thanks to its features. If you are reading this, you probably love Christmas as much as I do, so playing games with a festive theme well out of season, will not be frowned upon and won’t take you by surprise.

What I particularly love about this slot game, is the warm and fuzziness of the scene. With a fire burning in the background and emitting a warm glow, it will have you reaching out for your Winter woollies and a mug of hot cocoa in no time. It almost makes you want to reach out for one of the presents under the Christmas tree and to unwrap it.

When it comes to the visuals, this slot game has succeeded in bringing out the warmth of the season, and I found myself enjoying this game much more than I should. The soundtrack is as you’d expect it to be, with the tinkering of the bells as you spin the reels. Without it being too distracting, it exudes an element of magic that is fitting for such a game.

Built over five reels and 20 fixed pay lines, your task here is to land winning combos onto one or more pay lines, to trigger cash rewards.

The fun part begins when the features are triggered. Don’t let this simple setup confuse you into thinking this is yet another standard slot game as this couldn’t be further from the truth. This slot game has so many features that you will be forgiven for finding the free spins round less than satisfying. At least when I landed the free spins round, it didn’t enthuse me as much as the other features.

Before we give a closer look at the symbols and features, here are some stats. Jingle Bells enjoys an RTP of 96.18%, and with a hit rate of 24%, you can expect to win every quarter of the time. It doesn’t make it high in terms of volatility, but neither is it bad either.

Symbols in this game are classic and staple Christmas favourites. The usual suspects, the standard playing cards show up as the lowest-paying symbols. The Wild symbol, as always, substitutes for any other symbol in a bid to create a winning combination. The highest paying symbols are all Christmas-related, including the bells, the socks and the candy canes.

During the base game, there are four various features that enhance the gaming experience. First off, we have the raining wilds, whereby Santa himself, walks across the screen and throws wilds all over the reels. It is not clear how many wilds you can expect to receive, but on average, it appears to be between three and four wilds.

There is also the substantial wild drop which causes a 3x3 wild symbol to drop onto the reels. If it falls on the middle three reels, you can expect your bankroll to be satisfyingly boosted. While I was playing this game, I succeeded in achieving a win of 160x my bet, which is quite significant, especially when considering that the maximum win you can achieve on this slot is that of 800x.

Another interesting feature sees one of the reels transformed into a winning one, generating wins with a barrage of high paying symbols.

Last but not least, there is the feature where Santa walks over to the Christmas tree to light it up, in turn adding a multiplier to your winning total.

But that’s not all. There are two bonus games available at your disposal in this slot game. The first of which is activated by landing three free spins symbols anywhere on the reels. When this happens, you are asked to pick one out of three Santa’s bags to open. You can be awarded up to a massive 25 free spins. Even better, regular features from the main base game, such as wilds, can also crop up boosting wins.

The other bonus round is activated by landing three Santa’s sleigh symbols anywhere on the reels. When this happens, you are whisked away to another screen, where you’ll see a pathway. Your main aim here is to get Santa as far along on the pathway as possible to get the best possible result. Hurrah!

I quite enjoyed Jingle Bells. Even though it’s a Christmas-themed slot game and it is now out of season, I found it entertaining and has that fresh and new game touch to it. Although it is more likely to appeal to those players who like high volatility games, it is still a slot game that is packed with plenty of features to keep you tickled with delight.

As already mentioned, don’t let the slot setup throw you off. I rolled my eyes a little bit when I saw the reel set up, but once I started playing it, I became quite fond of it, thanks to the numerous wilds and additional features.

If I have to be cynical, this Jingle Bells slot game gives you the hope of landing a rather generous gift. Land yourself the wrong gift, and it will feel like you have received yet another pair of socks, you didn’t quite ask for from your Aunt Mary.

Browse casinos with Jingle Bells and other slots from Red Tiger. Create an account and try the game for free before making a deposit.

You can play Jingle Bells in English, Finnish, Swedish, German and 18 other languages. 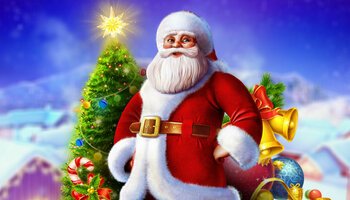