Jingle Spin takes place in Santa’s secret workshop, deciding which gifts are going under the trees and we get to see how he does it.

Created by Netent and released in 2018, Jingle Spins is one of the developer’s newer slots. While it does show in its graphics I think that the features are not as good as those belonging to other slots.

We find ourselves in Santa’s workshop as Santa spins the 5-reel, 3-row playing field with its 20 paylines. It all looks great as I’ve come to expect from Netent, with the background looking like an actual workshop. The style is cartoony but in a special style that reminds me of living statues. Like Santa, the symbols and his elves are all carved out of stone!

As can be expected from a slot set during Christmas, the soundtrack adds a lot of bells and light music. Santa is quite involved in the game as well, laughing or humming to himself when the game lands on a winning payline. I thought that added a bit of character to him since he doesn’t do much else during the game.

Above the reels we see a series of elves who also participate in the game, passing along bonus symbols with every spin. I thought that was a nice touch even though I’m not a big fan of the feature itself.

The game has a series of unique Christmas-themed symbols and fills out the selection with standard card symbols. Though I do want to mention the artists did a good job with these as they look like ornaments you could hang in your Christmas tree!

The Wild in Jingle Spin is a gift box, which plays into the mechanics of the game. The symbols are largely not animated except when a Wild has a feature dropped into it, at which point the box opens and closes before granting the feature. I thought that was a nice detail!

Jingle Spin has a fair amount of features. Before I list them I’ll explain the mechanics of the slot a bit more. On the right side of the screen, Santa turns a wheel every spin. This wheel has a random feature. If the wheel lands on a feature it will pop that feature to the top of the screen where a series of Elves sit over the reels. Each spin they will pass the feature to the left.

If the feature reaches the first reel and there is no Wild box, it will disappear off-screen. If at any point the feature is on a reel that also has a Wild box, the Elf will drop the feature into the box. This activates the feature. These Wild boxes also operate as regular Wilds even when there is no feature in them, but all other features need to be activated this way.

I thought this idea was clever and fun in concept but it got me increasingly frustrated as I played. The game’s listed Medium Volatility fits my experience with the base game: the wins are regular but not common, and not high or low. When it comes to activating the bonus features I felt the volatility was extremely high.

It was probably just my perception but I had the idea the feature wheel always preferred to drop into an empty slot. The needle would often inch towards the line between two slots and very often it seemed to either click over or click back, depending on if the slot was empty.

Now that could just have been my perception but even if it really was all random, the fact that it annoyed me was a bad sign. Add to that the fact that once a feature was finally added to the top row, it would be rare for them to coincide with a Wild box. I must have played for at least an hour before I activated a Free Spins mode.

Jingle Spin has a lot going for it. Coming out of the Netent stable means it’s a solid game with a large number of features, some beautiful graphics and a fitting soundtrack. If you’re looking for a Christmas-themed slot you can’t really go wrong with this one.

For me personally, the game missed some steps. The feeling I got when seeing the wheel spin was that it was being unfair and it doesn’t really matter if it’s true or not. That annoyance didn’t go away and since so many of the features depend on it, my attention was constantly drawn to it. That just kept me on edge.

In the end, I would personally choose other Christmas slots if I was in a holiday mood. Secrets of Christmas is also made by Netent and has less frustrating features. Meanwhile, Push Gaming developed a cute Christmas game called Fat Santa that looks gorgeous too. There are even more choices beyond those two.

If you decide to give Jingle Spin a try, I’d recommend starting with a lower bet. You can choose to bet between £0.20 and £200 so that gives some flexibility. The max. win of 1,000x your bet isn’t something to write home about but it’s not bad either.

Honestly, I’m hoping NetEnt will attempt a game in this style again but maybe tweak the features a bit and I think it could be a big winner.

Browse casinos with Jingle Spin and other slots from NetEnt. Create an account and try the game for free before making a deposit.

You can play Jingle Spin in English, Finnish, Swedish, German and 20 other languages. 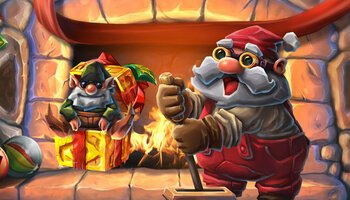