The mullet is back and so is Joe Exotic. Join him in this 5-reel, 4-row action-packed slot with 20 paylines. The style of the game revolves around hillbilly chic. There are glitzy baseball caps, fireworks, big cats and loads of guns sitting alongside the characters from the reality TV show. Unfortunately, Carole Baskin doesn’t make an appearance.

The music soundtrack was composed (apparently) by none other than the man himself and the FX are straight out of America’s Deep South. The mechanics follow Joe Exotic’s highly volatile life and the slot comes with a max payout of 3,500x.

Symbols feature the most well-known characters from the reality series. Joe Exotic takes centre stage and is featured in many of the symbols and all of the features.

Hitting three scatters will trigger the Exotic spins bonus round awarding 9 free spins. Here the Joe Exotic Super Multiplier Wild will lock into place on the middle reel. Every time a win is registered the multiplier goes up by x1. During the round, if two scatter tiles appear on reels 1 and 5 an extra 5 free spins are added to the tally.

It’s time to count the votes! This feature is triggered by 3 Vote Joe symbols appearing on reels 1, 3 and 5. Here you will enter the counting hall and will have to choose from the 4 election runners. Choose from the 10 ‘vote’ pins available and the first 3-of-a-kind candidates you reveal will award the prize ranging between 5x and 150x.

This feature is triggered by the Tiger Bounty symbols appearing on reels 1, 3 and 5. Joe Exotic will make an offer and the slot will either collect or ask for a better one. Wins here range from 5x to 50x.

There is no doubt that in a game that features the Tiger King, the volatility would be cranked up to the highest possible level. The 5/5 volatility was definitely what I experienced in the game. The hit rate is set to 4/5 so whilst I was getting a few small wins relatively frequently these stayed under the 3x and made my funds deplete quite quickly. The maximum yield from a base game win was 15x and it only happened once.

Then, I managed to trigger the Vote Joe bonus feature where I got 3 Joe Exotics and a sweet instant win of 150x. The Tiger Bounty feature was triggered a few times too and at one point I also managed to land the top 50x win. However, the bonus round was a tough one. After 500 spins I lost hope of landing it.

I did get a glimpse of bonus round gameplay and there is no doubt this is where the glitzy wins can be achieved. The multiplying wild in the middle can produce some great wins and with the possibility of extra free spins, you can see where the 3,500x max win can happen.

Browse casinos with Joe Exotic and other slots from Red Tiger. Create an account and try the game for free before making a deposit.

You can play Joe Exotic in English, Finnish, Swedish, German and 18 other languages. 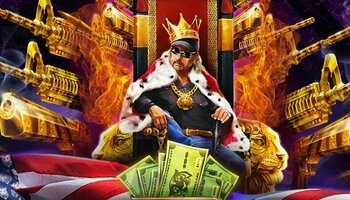