If Indi Jones is your epitome of an irreconcileable adventurer then John Hunter and the Aztec Treasure is a great game to look for prized artefacts.

The John Hunter series has caught my attention since the first game was released by Pragmatic Play. The game at hand is a sequel that follows through with the original but improves on the dynamic.

I like the fact that the company instilled each instalment with different specifications and maximum payouts. For example, Aztec Treasure has medium to high volatility and a theoretical RTP of 96.50% with up to 7,776 ways to win. The maximum payout from a single spin (free spins mode) is 10,804x your bet.

Pragmatic Play could have simply given each title a different skin, but they did the hard work of weaving together a wholly different engine.

You can call it a mini-Megaways payout system because the five-reel layout is one reel short of the full Megaways system. Regardless of that detail, the gameplay is fun and can result in big payouts, but in my experience, only during the free spins bonus.

Pragmatic Play takes you deep under the canopy of Mesoamerica for a theme that reflects Aztec ruins, wild animals and artefacts. As far as the quality of the design is concerned, John Hunter and the Aztec Treasure does just enough not to appear mediocre.

Most of the symbols are slightly animated and the audio tune is decent. What I found to be a smudge on my gaming experience was the deep-green background of the reels. The game would have appeared a lot more lively and engaging if there was more pep on the reels.

I can tell that my bias against the graphic design is due to the fact that I love Gonzo's Quest, as this is my number one game in the Aztec/Maya/Exploration theme and a lot livelier in its gameplay.

The two golden artefacts stand for the Wild and the Bonus symbols. The Wild can land on the three middle reels and the Bonus is a scatter that can land anywhere to trigger the game of free rounds.

This is the only extra feature of the game but it is worth its weight in salt - so to speak. The reason why I've enjoyed playing this game are the kickers that are part of the bonus.

First off, there isn't a fixed number of free spins that you can start with. Landing three or more Bonus symbols takes you to a golden wheel that determines the number of spins. This can range between 5 and 25 in increments of 5.

If the bonus game triggers with four or five symbols, the wheel is spared of the plates showing 5 and 10 spins respectively.

The second detail is that each spin can result in a different multiplier value, which comes randomly. Every spin that results in a win is multiplied by the value that shows on the topmost row.

Because the Bonus symbol is present during the feature, you can win additional free spins by landing two or more of these symbols.

As I said at the start, John Hunter and the Aztec Treasure is like a mini Megaways game. This means that the payout system is ways to win where matching symbols need to align on adjacent reels.

Sadly, winning outcomes don't result in cascading wins as is the case in Megaways slot games. On the other hand, the payouts are just slightly better than the latter and you can win combinations consisting of more than five symbols.

That said, the paytable structure has been trimmed at the expense of winning outcomes that are won in the base game.

Out of ten paying symbols, you can win back your full bet starting with the second to last symbol (panther). That's a very long stretch in my opinion and to make things even less appealing is the fact that you need four matching symbols to get 1.25x your bet.

The full paytable structure is as follows:

John Hunter and the Aztec Treasure is a good fit for players who like highly volatile games. In order to make a winning outcome that's worth bragging about, you'd need multiple extra spins during the free spins bonus and win multipliers that are both frequent and high in value.

Regardless of the low values on the paytable, the game has a maximum payout potential of a whopping 10,804x your bet but a simple fact-check has it that you can’t make a big win in the base game. The bonus feature may be worth playing for, but you’d be on the losing end until you win the three scatters.

Play John Hunter and the Aztec Treasure™ for free

Browse casinos with John Hunter and the Aztec Treasure™ and other slots from Pragmatic Play. Create an account and try the game for free before making a deposit.

You can play John Hunter and the Aztec Treasure™ in English, Finnish, Swedish, German and 17 other languages. 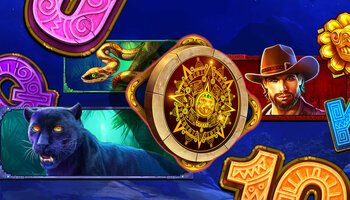