John Hunter and the Book of Tut™ slot review

Play John Hunter and the Book of Tut™

John Hunter and the Book of Tut once again brings us hot on the heels of this titular hero who will now explore Egypt and look for the famous Book of Tut in a slot that further features free spins, expanding reels and wilds.

Just like most other big developers that make video slots, Pragmatic Play also has its own special adventurer with a trilby and a whip who travels the world looking for mythical treasures. We were already introduced to this character in slots like John Hunter and the Aztec Treasure, or John Hunter and the Mayan Gods, but in 2020 we were allowed to travel with him to Egypt and look for a new item there.

The game looks like any other at first glance with a 5-reel, 3-row playing field and a minimal 10 paylines. Players are shown a collection of standard Egyptian symbols like golden cat statues and scarabs, and the reels are further filled with simple card letters. I was not terribly impressed by the graphics, even though things look sharp and detailed enough.

John Hunter is obviously also present as the highest paying symbol in the game, but that also makes him quite rare. The background shows us in the heart of Egypt, standing next to what might be the Nile and with a view of the pyramids in the distance. This background is actually somewhat animated with clouds passing by overhead. A nice detail that a lot of other slots won’t spend time on.

The symbols in John Hunter and the Book of Tut won’t be surprising anyway with their originality. As the game is set in Egypt we can expect the usual fare. Again, nothing against the art itself, it all looks fine, but the creativity has definitely suffered. Getting a win will show you the payline it happened on as well as a total coin win count. Players might occasionally get multiple wins at a time but usually, only a single payline will be hit.

Due to the average number of symbols, the features that don’t activate very frequently and the small number of paylines, the game lands on High Volatility. I definitely noticed this, even though some bigger wins triggered to keep my funds balanced enough, wins will be rare and players should be prepared to play for a longer time.

In order to not run out of funds before any bigger wins are hit, the game allows you to pick a bet between £0.10 and £100 per spin. As an incentive to keep playing, John Hunter will have a max. win of 5,500x your bet to pursue. Although that would obviously be nice to win, high volatility slots often have a similar size jackpot and in sense, this game isn’t special.

John Hunter and the Book of Tut only has a small number of features and I found these appear very infrequently. Expect most of the game to play out on the base game without many of the features to activate. It took me a long time to get into the free spins mode even once, and the expanding reels only activate during this mode as well.

One positive thing the game has is that the Wild also counts as a Scatter. It can substitute symbols in order to facilitate wins but it will also count towards a win anywhere on the screen if there are enough of them. Get 3 or more and the game will automatically trigger the free spins mode.

This mode is the way to get big wins, even though that’s not necessarily guaranteed. Before the free spins start the game will select a random symbol. That symbol will become expanding during mode. Anytime the symbol appears on the screen and there are enough to grant a win, so 3 or more, they will expand to fill the reel they are on.

I found the free spins mode to be rather difficult to trigger and I only activated it twice during my time playing. Both times the win I got was big enough to make me my funds back, but it will still depend on the game whether or not the win is really big or just a nice bonus.

John Hunter and the Book of Tut is an enjoyable game in a line of similar slots. The Egyptian setting is getting a little tired in general, but I think Pragmatic Play did what it could with it. The graphics are fine, there are only a few animations but the ones that are there are fine.

One thing I should mention is that the music is very bad. There really isn’t any to speak of except for a terrible electronic whine that plays every time the reels spin. Getting a win will trigger a little jingle, and only when John Hunter is part of a win do we hear anything resembling Egyptian music.

If you don’t mind playing without sound and you’re okay with seeing yet another Egyptian-themed slot, John Hunter and the Book of Tut might be a good High Volatility slot to try out. I found my funds to stay pretty stable and who knows what someone can find in the Sahara sand.

Play John Hunter and the Book of Tut™ for free

Browse casinos with John Hunter and the Book of Tut™ and other slots from Pragmatic Play. Create an account and try the game for free before making a deposit.

You can play John Hunter and the Book of Tut™ in English, Finnish, Swedish, German and 19 other languages. 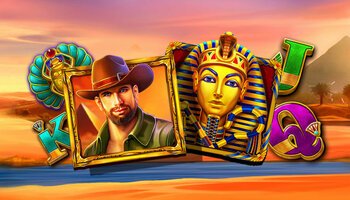