John Hunter and the Tomb of the Scarab Queen™ slot review

Play John Hunter and the Tomb of the Scarab Queen™

John Hunter and the Tomb of the Scarab Queen is one in a series of adventures by the titular John Hunter as he explores dangerous and hidden places for archaeological finds. Players who join him can be surprised with sticky re-spins, colossal symbols and free spins.

The game was developed by Pragmatic Play who released this game in 2019, as the third slot in the series of 4 games that have come out so far for this character. It will be clear to most people who John Hunter is based on, as he wears the usual trilby, leather jacket and a trusty revolver. The slot itself meanwhile features a 5-reel, 3-row playing field with a respectable 25 paylines.

When it comes to the graphics, they look good but aren’t terribly inspired or original. I found the game to look very similar to the other John Hunter slots in the series with only the specific elements relating to the name of the slot being different. As a result, I’m afraid a lot of people will have trouble keeping them apart, which might be a detriment.

The sounds in the slot are largely standard fare when considering the library of slots that exists. The jingles when there’s a win are hard to tell apart and I didn’t think they fit the Egyptian theme at all. The soundtrack itself is also rather simple but it does fit the setting a lot better. During the free spins mode, it picks up a bit more and starts to become annoyingly loud.

John Hunter and the Tomb of the Scarab Queen has the usual divide of low- and high-paying symbols that most slots use. The low-paying symbols are displayed as card letters in different garish colours. They help keep things easy to tell apart but they also ruin the mood in my eyes, as the title suggest a dive into a dark tomb but instead everything is extremely light and bright.

The high-paying symbols are a bit more original but as I mentioned before, they resemble the ones in the other John Hunter slots a lot. That makes sense since it is the same character, but it also betrays some sense of complacency from the creators. There are some nice animations to see though, which help the rather static gameplay.

Since the game has a regular playing field with a moderate number of paylines, as well as various features and average payouts, it shouldn’t surprise anyone the game has Medium Volatility. In my experience, playing the game will grant slightly bigger wins every so often, and the player will get small wins occasionally in between. If you are a player that prefers to get something regularly and not have to wait a long time for a big win, I feel like this was the perfect middle-ground.

If players aren’t quite sure they are getting their money’s worth from the standard bet they can choose to set their bet at something between £0.25 and £125 per spin. The game also has a max. win of 15,500x your bet which is very high, especially considering the volatility. Most high volatility games released the past few years don’t offer a jackpot even half as big. Having said that, I never felt like I was very close to winning the maximum win.

First, a quick look at the features:

The different types of Money symbols add some interesting mechanics, where the total coin win can be multiplied or an entire reel is instantly filled. As can be expected, this makes the feature quite volatile because if these special versions don’t appear the effect of the Money symbols is instantly reduced.

All in all, I thought the features were the most intriguing part of the game. They can really amp up to create some massive wins and with such a high jackpot the sky is almost the limit. There is a good opportunity for the player to get some nice increases in their funds, and by tweaking their bets they can increase or reduce the risk.

John Hunter and the Tomb of the Scarab Queen is a nice-looking slot but released a little too close together to the other games in the series. As a result, they all feel rather identical and it will be difficult for players to tell them apart. The fact that most of the setting is also based on Ancient Egypt doesn’t help.

The features are the main standout for the game, offering players some actually helpful elements that can turn a single spin into a massive payout. Obviously, this won’t happen regularly but even a smaller win can feel like a nice bonus. The game will let you know that there is a lot happening, as the screen is constantly filled with giant symbols and flashing signs.

Players who enjoy John Hunter, the idea of an adventure slot or who think the features sound appealing should definitely give this game a try. The gameplay loop is quick and the opportunity for big wins is enticing.

Browse casinos with John Hunter and the Tomb of the Scarab Queen™ and other slots from Pragmatic Play. Create an account and try the game for free before making a deposit.

You can play John Hunter and the Tomb of the Scarab Queen™ in English, Finnish, Swedish, German and 17 other languages. 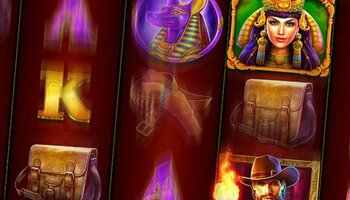