Joker King looks to take one of the most popular figures in slots back to the front of the stage, the joker! Given some real personality, the joker plays a big part in the game as do the wilds and the free spins that can make a difference.

The game clearly harkens back to a simpler time, using inspiration from the classic fruit machines but brought into the modern age. Developer Pragmatic Play released this slot in 2021 after all, allowing players to experience these symbols and the joker himself in all their glorious details.

Even though the game does not show a lot of creativity when it comes to its design, it does change things up when we look at its 6-reel, 4-row playing field. The game only makes limited use of the larger board as it uses a moderate 25 bet lines on which players can attempt to score.

When it comes to design, everything looks sharp and colourful. The symbols aren’t original by any stretch of the imagination but they have been given an updated look, using some perspective and sheen to make it look nicer. The main draw to me was the joker character himself, who is seen peaking over the loading screen, animated in several subtle ways.

Joker King has the symbols that we’ve come to expect from fruit machines and similar nostalgic slots. The larger playing field means there are more of them on the screen at the same time, and wins are shown by having the tiles light up. It’s all very serviceable without being original.

The payouts for any win is very low, with even the longest win line only barely paying back a spin. The game depends heavily on getting multiple wins at the same spin, the multiplier added by having Scatters on the screen and the fact that the joker adds random wilds to the screen regularly. With so many modifiers the game has High Volatility which players can deal with by adjusting their bet. For this, they can pick a bet between £0.25 and £125 per spin. The maximum win of 5,000x your bet meanwhile should keep a lot of people interested.

As a game that reaches back to the old school gameplay, it does change things up somewhat with the features. Not that these are inventive or even rare, but players who are expecting a classic fruit machine won’t get quite what they are looking for.

First of all, a quick overview of the features:

The base game will most likely be the place where you can spend most of the time. The game will grant you regular wilds quite often but those are frequently not enough to grant a win because of the large playing field. When the joker activates and turns a certain symbol into wilds this can really change the game. It would often happen that I would get a dozen winning paylines at a time.

This is obviously the intended outcome considering the low payout per win line, but it’s not something that will happen every spin. It does appear to be quite random and won’t accidentally pick the symbol that only appears once or twice, but often chooses a symbol that fills almost the entire screen.

Joker King is a game that actually uses the classic fruit machine look but makes it a little different by adding some extra features. The game still feels like a normal video slot but it makes use of some nostalgia to keep players engaged. At the same time, it doesn’t score any points when it comes to originality.

I had a good time with the game but it wasn’t very remarkable either. The slot brings the joker to life more than other similar games, and the designers didn’t go for a cartoon or horror theme either. It makes it all feel a bit lighter and less serious.

The game is probably a nice option for those that enjoy the classic design but don’t want to play an old-school 1-reel, 1 payline fruit machine. There are some simple features that spice up the gameplay while it all looks sharp and colourful.

Browse casinos with Joker King™ and other slots from Pragmatic Play. Create an account and try the game for free before making a deposit.

You can play Joker King™ in English, Finnish, Swedish, German and 21 other languages. 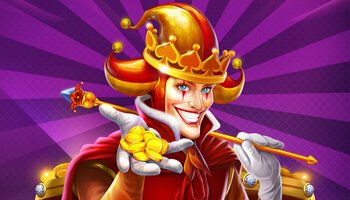