Joker Leprechauns brings together two of the most famous tropes in slots, the leprechaun and the joker. This special hybrid offers not only a unique combination of visuals but also grants players the ability to play with free spins, wilds and 4 jackpots.

The slot was originally developed by Kalamba Games, a new studio that is hard at work making a name for itself. Released in 2021, Joker Leprechauns is one of their most recent releases and is likely to attract some attention. When it comes to the setting, the idea is original but I didn’t think it was implemented very well. Other than some standard symbols to fill the 6-reel, 3-row playing field the slot does not make any use of this original idea.

As far as graphics go, I wouldn’t consider the game to be extremely well done but there is some talent behind the design. The different symbols are drawn by hand and show some details that make them more attractive. At the same time, their lack of originality does them no favours and there are only a few original ideas to see here. When the player gets a win on one of the 40 bet lines, the only thing that happens is that the tiles are briefly lit up.

Players will have to contend with High Volatility as the slot has a larger playing field and a large number of different symbols. There are some special features that can be activated but they are not as likely to trigger as I would have liked. Players can augment the cost of their spins not only by picking a bet between £0.50 and £187 per spin. It’s also possible to increase the number of free spins and multiplier they get when activating the free spins mode by paying extra per spin.

Joker Leprechauns had the idea to combine two familiar tropes but it hasn’t done that with any of the symbols in the game. Instead of combining fruits and other slot symbols, these are all just presented as-is. If you have played any classic slot or fruit machine in your life, you will know exactly what you’re going to find here.

The game makes it possible to win the max. win of 10,000x your bet which is a sizeable number but not as big as the potential jackpot of their other slot, Speakeasy Boost. There are also 4 progressive jackpots that are shown at the top of the screen. Unfortunately, not one of them is actually big enough to beat the maximum win of regular play, making them feel somewhat irrelevant. On the other hand, they can obviously be triggered in a different way so I would see it more as an extra opportunity to get a bigger win.

Speaking of bigger wins, the game’s volatility comes into play a lot while spinning the reels. Wins are few and far between, often only paying back a few spins at a time. I felt like it would require either a fortunate combination of multiplier wilds or the activation of the free spins mode to really pay off. As mentioned before, it is possible to increase the number and multiplier of the free spins mode by paying more per spin.

The symbols in the game aren’t especially original, but they come with the following values:

Joker Leprechauns is a slot with some interesting ideas when it comes to its features. I wouldn’t call any of them particularly original but the developer has tweaked them slightly to make them a bit more appealing for the average player.

Joker Leprechauns has a name that implies some innovation that unfortunately does not come to fruition in the actual slot. The symbols are rather bland and simple, while the background also offers no details on the theme whatsoever. It really feels like the developers came up with the name but weren’t really sure what to do with it.

Regardless, the gameplay is solid if also very simple. Any average player will instantly understand the game and be able to start spinning. That’s obviously not a bad thing. The only thing to do is to make sure the Hyperbet function is set on the right conditions, which will augment the cost per bet.

I found the game to be quite enjoyable but also rather forgettable. Without really using the theme as a source of inspiration the game is set to disappear in the large number of similar slots that also use the same ideas to draw players in.

Browse casinos with Joker Leprechauns and other slots from Kalamba Games. Create an account and try the game for free before making a deposit.

You can play Joker Leprechauns in English, Finnish, Swedish, German and 9 other languages. 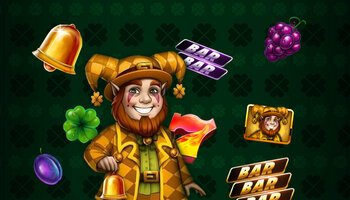