Joker Strike takes the classic concept of the fruit machine and updates it to the modern time with its beautiful images, enticing features and a special Hi(gh) Roller game.

Developer Quickspin released Joker Strike in the spring of 2018, giving players the opportunity to experience this great-looking game for the first time. Since then, Joker Strike has faded into obscurity somewhat but there still might be something interesting to find. The game comes with a 5-reel, 3-row playing field and 10 win lines.

Graphically, Joker Strike looks great but does not win any points when it comes to originality. The game uses all of the classic symbols that players are familiar with, largely looking as they always do. I would say the only real original element is the Joker itself, and only on a visual level.

The music is likewise rather simple and familiar. It sounds like a relaxed little band playing in the corner of a bar, or I would even imagine hearing it in the elevator. Wins are amplified by a quick little jingle. Again, not much to write home about but it keeps the silence away.

While the game uses the standard symbols, I did like the way they look. They’re very colourful and easy to tell apart. Unfortunately, most of it is not animated which makes the game look rather static. Because there is a rather high number of different symbols and only a few paylines, getting a win is quite hard and that results in its High Volatility.

Unlike most slots, players have the opportunity in Joker Strike to activate a Hi Roller mode where they activate additional features at a higher cost per spin. I’ll go into the details under the Features header but suffice it to say that it increases the likelihood of a win as well as the value of a win.

Getting a win isn’t very easy, considering the large number of symbols and the low number of paylines. When it does happen, that symbol is highlighted on the outline of the bar. A small light rotates around the outline until it stops. If it stops on a different symbol, nothing happens. If it stops on the highlighted symbol, two symbols for every one part of the original payline is added to the playing field.

Let's say I get a three-of-a-kind of Hearts on the screen. The little light goes around the outline and activates the symbol. Then, for each of the 3 Hearts already on the screen, 6 more Heart symbols are added randomly on the playing field. This will likely create a large number of betlines that are then added to the initial win.

Explaining it is rather difficult but it is very obvious once you start to play the game. The border is clearly marked with the different symbols, especially when they are lit up. Triggering the feature also clearly shows where the symbols come from and where they are added. None of this interrupts the regular gameplay.

Then there is the Hi Roller game. This is a bonus feature the player can activate whenever they want and however many times as they want. There are 3 tiers of Hi Roller, each with their own features activated.

While the 3 tiers are more likely to grant you wins because of the additional features, they are also much more volatile. I’ve had multiple times where I used Tier 3 and won zero coins. Because you can only activate it for 5 spins at a time, it does mean there is a break every time and an easy way to see how much you gained. Seeing a £0 result after spending £50 in a row made me really reconsider using it again.

I also doubt it’s really worth it, since the few times I did manage to win more than the activation cost, it wasn’t even twice the bet. That meant I needed to win 4 or 5 times to make back the 2 times I didn’t win anything. It’s something players need to keep in mind constantly.

Joker Strike is an alright slot if you enjoy a standard slot machine with an interesting mechanic. It’s unfortunate that I found the mechanic to be rather simple and only play a small role in the overall game. Adding additional features at a flat cost is nice for some players but I think most people prefer their slots to just have all features activated at all times.

It’s possible to pick a bet between £0.10 and £100 per spin, but that becomes irrelevant if you choose to use the Hi Roller Game. These come with set costs that aren’t based on your original coin bet. It also forces players to play in a higher bet category than they might be comfortable with if they want to use all the features. It’s not something I’d be fine with.

The game looks alright but doesn’t attempt to really invent any new ideas or interpretations when it comes to the symbols. Players that enjoy the outline idea with Random Symbols added to the playing field might get a kick out of this slot, but there are other games that are better.

Browse casinos with Joker Strike and other slots from Quickspin. Create an account and try the game for free before making a deposit.

You can play Joker Strike in English, Finnish, Swedish, German and 23 other languages. 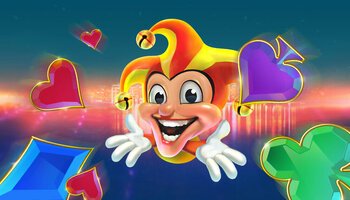