Jolly Roger 2 is the sequel to the original Jolly Roger. This latest rendition features special graphics, a bonus game and free spins mode, all while taking place aboard a pirate ship in the middle of the Caribbean.

The slot was developed and released by Play ‘n GO, who also created the original slot. This version was released in 2020, making it brand-new and it shows. The graphics in this game are amazing, with a crisp cleanness and a lot of detail. It is obvious that this 5-reel, 3-row slot was made with a lot of attention and care.

Getting a win on any of the 20 paylines will often result in a brief animation with the involved symbols. Then there are the animations that play when the bonus game or the free spins mode, which help create a living game as well. The main complaint I have concerning the design is the fact that the low-paying symbols are simple card letters that aren’t integrated into the theme very well.

The music is quite bombastic and fits the pirate theme very well, with a lot of drums and bass. If you’re familiar with the popular pirate movies from recent years you’ll have a good idea of the style of music. It’s very fitting and it put me in the right mood immediately.

Jolly Roger 2 features a collection of symbols, the high-paying ones all made to fit the setting of the slot. The low-paying symbols are just card letters which have the same quality as the other symbols but lack the connection to the theme. A missed opportunity if you ask me. Since the game has Medium Volatility, players can expect bigger but spaced out wins.

As you can see the payouts are very low, with only the top 3 symbols paying the initial bet back with a three-of-a-kind win. The player is therefore always dependant on getting multiple wins at the same time to make their bet back.

In my experience, the game did lean towards a positive net result, with me playing long enough allowing me to make back more money than I spent. Keep in mind that this is obviously subjective and that every game will be different. Players can augment the risk by choosing a bet between £0.20 and £100 per spin. Meanwhile, the max. win of 5,000x your bet should be a nice incentive to keep trying.

Jolly Roger 2 has quite a lot of features that are luckily pretty well measured out so as not to overwhelm players. These include:

The game doesn’t overwhelm the player with these features by keeping a number of them locked behind the bonus game. The bonus game is only activated with 3 bonus symbols on the screen at the same time. When this happens, the player is presented with 12 scrolls. Clicking on a scroll turns it around to reveal the feature.

Once a player has found 3 of the same features, that feature is activated. It’s not possible to trigger more than 1 feature at a time. The one that activated the most frequently was the instant coin win, which would show the pirates hoisting a treasure chest out of the water before opening it. This would reveal a random coin win.

Other features include the Bottle of Rum mode which is a single free spin but with Stacked Wilds added to the screen. The player picks 1 of 5 bottles of rum to reveal which random reel is filled. These bottles can also reveal an extra pick, potentially letting the player fill the entire screen with stacked wilds.

The other free spins mode functions more like a regular free spins mode. Players receive 10 free spins to start with. There is a map at the bottom of the screen and every treasure map that appears on the reels will advance the ship one space. Every 4 treasure maps the ship will discover a clue towards the final treasure, unlocking a special additional perk like extra spins, a higher multiplier or random wilds.

I found the features to be quite fun and they also appear frequently. The way they are introduced means players are not likely to get overwhelmed, with every feature including a short explanation screen before starting.

Jolly Roger 2 is a beautiful slot that shows how much talent Play ‘n GO has at creating some visually stunning games. The graphics are definitely a highlight for me, even when the low-paying symbols are uninspired. The large number of unique animations also help in creating an evocative slot.

In terms of gameplay, this slot does require some investment from the players. The features aren’t especially complicated or deep but they do offer some variation that newer players might not be familiar with. People that enjoy classic experiences might also be turned off by the large number of features that detract from the base game.

I would definitely recommend this game for regular players who don’t feel especially strongly about experimental or classical slots. This game offers a baseline experience, added onto with a series of fun and exciting features.

Browse casinos with Jolly Roger 2 and other slots from Play'n GO. Create an account and try the game for free before making a deposit.

You can play Jolly Roger 2 in English, Finnish, Swedish, German and 30 other languages. 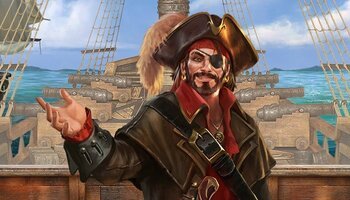