Journey to the West slot review

Journey To The West is another slot made by Evoplay Entertainment based on the Chinese myth of the Monkey King. The slot comes with animated symbols, stacked wilds and sticky wilds.

Developed by Evoplay Entertainment and released in 2016, Journey To The West takes its inspiration from a classic tale surrounding the famous Monkey King as he travels to the west to obtain sacred texts. The original story was written in the 16th century and continues to be a popular piece of fiction in many Asian cultures.

The slot took this story as its inspiration in not only the design of the slot but also several of the features. I found the art to be quite beautiful, with a grand view of a lake by some waterfalls as the Monkey King stands ready to duel an opponent. The 5-reel, 3-row playing field is largely transparent allowing the player to see the background in all its glory.

There are a total of 30 betlines in this slot, which combined with the modest number of symbols results in a Low Volatility. The symbols are all animated, some are characters that make some move, the rest are card symbols that simply spin around. Still, I found the movement to fit the energetic vibe of the game.

The music is based on classic Asian instruments but with a bombastic feel to it, sounding as if it was recorded by a complete orchestra. The spinning of the reels sounds like there is someone spinning a weapon while wins only trigger a short blip. All in all, the music helped in affirming the epic feel of the story while still being quite original.

The game has a series of symbols, some of which are based on characters and objects from the story while the rest are card symbols. For those that know my reviews, I don’t particularly like these card symbols since they very rarely fit the theme. That is the case here too, but at least the developers put some effort into making them look suitably extravagant for the theme of the slot.

The Monkey King is the highest paying symbol in the game, and it also pays out if there are only 2 on a winning betline. Except for the Blue Monk, all other symbols don’t pay back the bet amount when you get three-of-a-kind. You require at least 4 to win your money back, and even that is not enough with the Queen, Jack and 10.

As mentioned before, this has to do with the low volatility which asserts that you will win regularly and often more than 1 payline at a time. In my experience, that happens frequently but not all the time which resulted in a slow decline of my funds.

Journey To The West keeps its features quite humble. Players can largely sit back and relax and there won’t be much demanded of them. The only things they have to do is spin the reels and select a bonus feature during the free spins mode.

The features are split between the base game and the free spins mode, as the three main features don’t appear during the normal gameplay. That means that the base gameplay mostly consists of simply spinning and seeing any wins come by. The Wilds show up pretty regularly, enough to grant some smaller wins but in my experience not enough to be a net bonus.

The free spins mode triggered quite often while I played, and the added effect of having the Wilds act as scatters did also help in getting wins. Before the free spins mode started I would get to pick one of the 3 features: a 5x multiplier, the expanding wilds or the sticky wilds. I found that the two Wilds features were the most beneficial as the 5x multiplier was very dependent on getting a big win to be worth it, while the two Wild features helped in getting wins.

The game is rather simple even with the different features and it felt like a slot meant for the casual player that enjoys a pretty-looking slot with a classic play experience.

Players that are looking for beautiful graphics while not being overwhelmed by multiple features will probably enjoy Journey To The West. The game offers a modern experience while keeping the gameplay close to the original slots.

Players have the ability to pick a bet between £0.10 and £500 which is quite a large scope. Meanwhile, the max. win is only 835x your bet which is low but fits the volatility. If you keep a close eye on your funds you shouldn’t get any big surprises while playing this slot.

If you’re a player who enjoys the more experimental games, Journey To The West probably won’t scratch that itch. Its gameplay is very much a standard experience.

Play Journey to the West for free

Browse casinos with Journey to the West and other slots from Evoplay Entertainment. Create an account and try the game for free before making a deposit.

You can play Journey to the West in English, Chinese 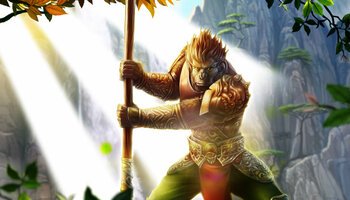