Since its movie release back in 1995, Jumanji has enjoyed colossal popularity to become a cult movie classic in its own right. Over two long decades later, this movie has been transformed into a slot game, thanks to Swedish software provider Net Entertainment.

The movie was itself so popular that it was re-created back in 2017, featuring none other than Dwayne ‘The Rock’ Johnson. I’ll quickly give you a summary of the movie. A twelve-year-old boy Alan Parrish is playing a board game and magically disappears within the board game. The game is later rediscovered by two children in 1995 releasing Alan, who is now a grown man (played by the late actor Robin Williams) along with a variety of jungle creatures who cause chaos in this small tightknit community. Spoiler alert: All goes back to normal, with Alan going back in time to 1969 and being a child again.

Back to the present day, the Jumanji video slot is chockfull with adventure and most notably, action on the reels, with numerous bonus features and a mini-game that takes place on the same board used in the movie. Unfortunately, you won’t be transported to the jungle, but the game itself can transform your bankroll with lucrative winnings during both the base gameplay and the bonus features.

As you have come to expect from NetEnt, you can enjoy striking visual effects, heaving over the reels and a tense soundtrack of jungle drums booming in the background. When this game first came out in 2018, I was taken aback. The game has a simplistic concept at first glance, so I thought this was going to be a run-of-the-mill kind of play, with not much going for it. Still, the developers behind this game have thought of minutiae details to deliver yet another unique set of features and potentially big rewards.

Bring some mosquito repellent, put your helmets on and get ready to play Jumanji.

Before you even begin to play, you will notice the rather unusual layout of the reels. It is done in a way to weave the path of the Jumanji board game, where stairs, bookcases and monkeys fill every crook and nook of the game.

There are in total, 36 pay lines across the reels, requiring matching symbols across a pay line to win a prize. The lowest paying symbols in this game are the playing cards, while the highest paying ones are the Pelican, the Crocodile and the Rhino. The Lion is, by far, the highest paying symbol rewarding you a massive 140x your bet when he fills out an entire pay line. There is also a golden wild symbol that can substitute for other symbols other than the scatter symbol to help create a winning combo.

In total, there are four in-game features which can all be triggered randomly:

Then there are the free spins round, which is triggered when you land three to five scatters anywhere on the reels. Once activated, you are awarded, between six and eight dice rolls. Oh boy, this feature is something else.

You are then presented with four tokens and asked to pick one. You are nudged to roll the dice and to move your token along the board. There are four different types of free spins features, a Mystery feature, extra dice rolls or else cash prizes. Here’s a summary:

When NetEnt decided to take on Jumanji, the company knew all too well that this was going to be a mega-production that would push the barriers beyond its release. Understanding the abilities and powers that the team behind NetEnt has, this slot achieved what it was set out to do.

That being said, I found that the base game to be a little on the dry side. There’s not much there that isn’t run of the mill, but when it comes to the actual Board Game, it takes off with flying colours.

The fact that I succeeded in triggering all of the free spins features whilst playing was enough for it to become a personal favourite. If Lady Luck is smiling upon you, the Board Game session could extend well beyond its means, giving you ample time to pick prizes as you play along.

This is a medium variance game, so don’t expect things to go haywire, other than the team of monkeys shuffling symbols around and crocodiles falling onto the reels adding wilds. With an RTP of 96.33%, this outstanding game will provide you with more thrills and entertainment than the actual movie.

Overall, it’s a 4.5 out of 5 for me, simply because the base gameplay wasn’t quite as enticing. But wow, the features should have you catching your breath. I know, I did!

Browse casinos with Jumanji and other slots from NetEnt. Create an account and try the game for free before making a deposit.

You can play Jumanji in English, Finnish, Swedish, German and 20 other languages. 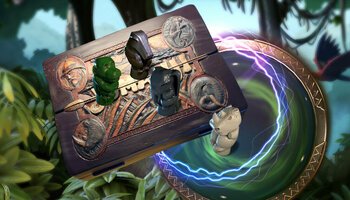