Jumbo Joker takes its inspiration from the classic fruit machine but decided to amp it up to eleven! High volatility, a large jackpot and multiple playing fields offer a variation on the standard gameplay.

The Jumbo Joker slot was created by Betsoft and released in 2017, hopping on the nostalgia train. The game has a look that reminded me of the old fruit machines that were found in the gambling halls back in the day. The background is a simple texture and the titular joker is shown multiple times across the screen, mostly using the same images but flipped.

You’ll find two 3-reel, 3-row playing fields in this game, each with 5 paylines. The symbols used to populate the slot are regular ones that you would find in most other classic slots. They also aren’t made to look especially original or detailed.

As you probably expect, the sounds in this game aren’t terribly original either. The game has no real music to speak of, even when there’s a win the jingle just sounds like a lot of noise. Only when you activate the Jumbo slot does the game start a song that reminded me of the circus, which I suppose fit the joker motif.

There aren’t a lot of symbols in the game and the value of each is shown on the screen. The main difference between this slot and most other games is that players can only bet higher amounts with their winnings with lower bets. The different paylines stay the same, however, as well as the possible combinations of symbols. In general, any symbol appearing 3 times on a payline will grant a win.

The game has a High Volatility which mostly translates in the regular spins not triggering wins very often. In general, the player is only allowed to pick a bet between £0.01 and £40 per spin.

Even though Jumbo Joker is a simple classic fruit machine, it did offer some interesting gameplay mechanics. As far as features go, there aren’t any to mention. There are not even any Wilds to speak of.

What will keep players busy most of the time is the Jumbo Meter. Players will mostly play on the lower reel of the slot, depending on the size of their bets. The more they bet, the bigger the potential wins are. However, whenever they do get a win these funds will not be immediately awarded.

Players can choose to collect them at any time, but the more interesting option is to spend it on the top reel. The top reel is exactly the same, except it uses higher bets to spin and also gives potentially higher wins.

I found this part of the game pretty appealing. Players are constantly challenged to pick between collecting their wins or using them to bet again. Do be aware that the top reel plays exactly the same as the bottom reel, meaning that the same high volatility applies there too.

In my experience, this way of playing can be extremely lucrative. It is important to know when to collect however since there is a point of diminishing returns. Betting away a large win for the prospect of another big win is not smart, and it’s better to collect and start again. I found the bigger wins to occur frequently enough to stay interesting.

Jumbo Joker is in many ways just a simple variation on the classic fruit machine. The graphics, the sound design and the gameplay are all basic. Players that enjoy this type of slot will therefore be happy to notice that these things are intact.

Still, as a player that usually prefers more modern slots, I thought the game offers very interesting gameplay through the two reels and the way the Jumbo Meter works. Being forced to choose between collecting your winnings and spending them on spins is a tricky one, but I found it often to work out in my favour.

Players that enjoy standard slot machines will have a good time by virtue of it being a great copy of the original style. Other players will likely enjoy the extra gameplay. Also, the max. win of 32,000x your bet can be very enticing.

Browse casinos with Jumbo Joker and other slots from Betsoft. Create an account and try the game for free before making a deposit.

You can play Jumbo Joker in English, Finnish, Swedish, German and 22 other languages. 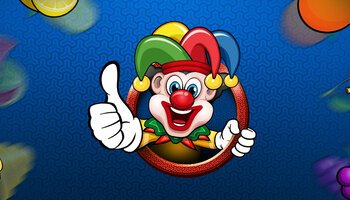