Jungle Books is a stunning slot where you get to hang out with the familiar characters based on the famous classic novel. Yggdrasil released Jungle Books in 2017 and I’m 100% sure that I’m not the only one it blew away with its beautiful visuals and innovative gameplay.

The game runs on iSENSE2.0+ platform, which is Yggdrasil’s own creation. When the slot first came out it introduced us an exciting new way to play; In Jungle Books, there are five different realms which belong to the characters of the game. Each realm has its unique look, style and two special features, which can be borrowed to another realm for short periods.

This exciting technique makes Jungle Books very interesting - and it’s also quite easy to get hooked because it leaves the player wanting to see which realm they’re about to enter next. Would it be the world of the bear, where we can search for the honeycombs, or the realm of the snake in which the game pays both ways? And shall we receive a guest from another world, and if yes, then who will it be?

The design, animation and sounds are all superb in Jungle Books. This slot is probably the most beautiful slot I have yet seen, or at least very high up on my top lists. I could go on and on praising the animation, character design, different settings and delightfully diverse features.

For the graphics and sound, I simply don’t have any complaints. I can just recommend checking this game for yourself.

In Jungle Books, the game area, as well as the features, change from one realm to another. The number and direction of paylines may change, the Wilds may have multipliers on them, or the winnings might be multiplied - everything depends on which realm you’re currently in and who’s the host of that realm.

Every character in the slot have their own realm and they work as follows:

In the boy’s realm, the adjacent reels are synced and each Wild creates 1-2 extra Wilds in the reels.

On every spin, the bear reveals a random symbol. This symbol is stacked during this one spin.

The super high pay fruit acts as a Wild in the realm of the black panther. On top of that, the panther can randomly multiply the wins by 2, 3 or 5.

After each winning spin, the tiger sticks the winning symbols for one free respin. The tiger also adds stacked Wilds in the tallest reels.

The host of the current realm stands (or hangs, in case it’s the snake) always on the left side of the reels. Sometimes they can have a guest, who appears to the game on the right side. The guests stay in the realm for a random number of spins, and they also bring one randomly selected feature from their realm to the current game. This extra feature is active only until the guest leaves.

When the host leaves their spot, it’s time for the change of scenery! You follow the host into the new realm and the previous host becomes the guest. After they leave, you stay in the new realm with the new host.

I still need to emphasize how much I like how this slot looks. I also like how the features from two separate realms can work together and create some really delicious possibilities.

However, as gorgeous-looking this slot is, it’s not entirely without flaws. First off, the game can get stuck to one realm for what feels like ages. And, of course, this usually happens with the realms with not-so-awesome features.

Secondly, the guests’ features may not get the proper chances to work. For instance, I really like it when I’m in the realm of the snake, and the tiger comes for a visit and brings the stacked Wilds with it. Together with the snake’s ability to pay both ways, this makes an excellent combo. But, in many cases, the stacked Wilds never land on the reels.

Also, the game doesn’t have free spins, if not counting the single respins in the tiger’s realm.

The last flaw concerns the almost non-existent big wins. After several hundred spins, the biggest wins just barely gave me a chance to scramble back to my starting point. In most cases, the slot just drained my account - sometimes quicker, sometimes slower, but always with determination.

So, in short, Jungle Books is a darn good-looking game. But, in the end, its appeal wears off due to the lack of proper wins.

Browse casinos with Jungle Books and other slots from Yggdrasil. Create an account and try the game for free before making a deposit.

You can play Jungle Books in English, Finnish, Swedish, German and 18 other languages. 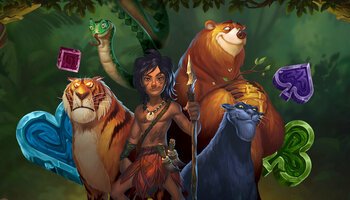