Jungle Spirit: Call of the Wild explores the darkest recesses of the jungle, confronting dangerous animals for the chance of a big payoff.

The jungle is a popular topic for many developers and Netent is no different. That’s probably why they added Jungle Spirit: Call of the Wild to their slot library in 2017! The game boasts a 5-reel, 3-row playing field with 243 paylines. That means that whenever the same symbol is on consecutive reels, it will count as a win.

The game is set deep in the depths of a massive jungle. I thought the graphics were well done, especially the background. It managed to capture the sweltering, claustrophobic sense of the jungle quite well in my opinion!

The only thing I was a little disappointed by were the animal symbols. They are made in 3D but look oddly smooth. That was a problem back when 3D graphics first came out and you can see a similar style in Netent’s Ghost Pirates. The difference being that Ghost Pirates came out in 2009.

Looking at a slot like Finn and the Swirly Spin, which came out in 2016, it has vastly superior 3D graphics. What happened there? Maybe these developers had less time or it’s a reimagining of an older slot? All I know is that the level of graphics doesn’t really hold up with what I’ve come to expect from Netent.

Not that the 3D models are poorly made. When they hit a payline they’re animated and every symbol can expand to fill a reel which also includes an animation. It’s just surprising that the graphics aren’t as high quality as I’ve come to expect from Netent.

Luckily the sound is as good as always, staying close to the jungle theme. It offers a lot of drums and there is a constant chorus of birds singing in the distance. A nice albeit safe choice for music!

As the name states, the game focuses a lot on jungle animals which are the high-paying symbols of the game. The rest of the symbols are high-cards. Those symbols are drawn in the style of ancient, overgrown statues that some old civilisation might have left in the jungle.

The symbols in Jungle Spirit: Call of the Wild look alright but the 3D models are quite dated. I’m also not sure if there are many elephants and bears in the jungle but they do fit the setting!

Jungle Spirit: Call of the Wild keeps it pretty light when it comes to the features, especially considering Netent made this slot. The features that are there are pretty simple to figure out and most of them show up regularly.

The butterfly shows up regularly, I would say almost every spin, and it can improve on a win. Especially during the free spins mode, a full reel of the same symbol can add to the total win.

If you’re looking for a rather simple base game experience I would definitely recommend Jungle Spirit: Call of the Wild.

Jungle Spirit: Call of the Wild has some outdated graphics but the gameplay is fine. There are only a few features which work well together. I found the listed High Volatility to be pretty close to my experience. The Free Spins mode is where I got substantial wins. The base game peppered some wins here and there but was largely not very lucrative.

The ability to choose bets between £0.20 and £100 makes it more controllable how dangerous you want to play. The butterfly feature gives it an extra boost to what is normally a pretty vanilla gaming experience. A max. win of 7,680x your bet is pretty substantial.

If you like the Jungle setting, Netent’s famous Gonzo’s Quest is also set deep inside a lush jungle. Other developers obviously also explored this dangerous biome. I personally really liked Jungle Wild by WMS even though it’s arguably even simpler than Jungle Spirit: Call of the Wild!

Play Jungle Spirit: Call of the Wild for free

Browse casinos with Jungle Spirit: Call of the Wild and other slots from NetEnt. Create an account and try the game for free before making a deposit.

You can play Jungle Spirit: Call of the Wild in English, Finnish, Swedish, German and 20 other languages. 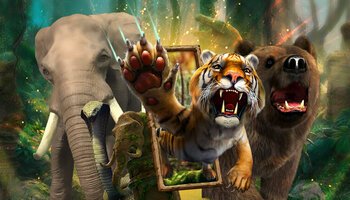