Jungle Stripes is an exciting slot that brings us into the far corners of the jungle as we struggle our way through dense foliage, trying not to get noticed by the dominant tiger. The game further features a bonus game, stacked wilds and paylines from both sides.

This game was developed by Betsoft and released in 2021. There is clearly a lot of attention to details embedded in this slot as anyone can see when they start it up for the first time. The game has an amazing number of small details and subtle animations that bring the jungle setting to life. This is all built around a standard 5-reel, 3-row playing field. With paylines from both sides, the game has 10 win lines that are essentially doubled.

We clearly find ourselves deep in the jungle as the surrounding background shows us. We can see a little monkey hanging from a vine and an exotic bird watching the reels spin. Meanwhile, the colours used are deep and vibrant which make it pleasant to look at. The reels themselves are populated with both low- and high-paying symbols that are somewhat animated.

The real eye-catcher is the striped tiger himself. This animal acts as a stacked wild whenever he appears on the screen. It also will trigger a respin after the wins are calculated. If you get another Wild on the screen during the re-spin, it will trigger an additional respin. Getting the free spins mode to activate is unfortunately rather difficult. If you do manage it, it can pay off tremendously.

Jungle Stripes has the usual division of symbols that we see in a lot of other slots. The high-paying symbols are originally created for this game. Besides the tiger, we also see different types of leaves, claws and mushrooms. The low-paying symbols are unfortunately only simple card letters that do detract from the setting somewhat. It would have been nice if those have been fitted to the theme as well.

The game has Medium Volatility with an RTP of 97.03%. This is quite high when comparing it to other slots. Players should always keep in mind that they are dealing with averages here. It is all based on millions of spins. This makes it unlikely that one player will get the exact same returns. Instead, players should anticipate that they can either lose a lot or win a little. Only a handful of players will walk away with a large sum.

Speaking of large sums, the maximum win of this game is 500x your bet. This isn’t very spectacular considering the volatility but it does mean that more players have a shot at hitting this jackpot. Finally, players can pick a bet between £0.10 and £100 per spin to either maximize their winnings or minimize their risks.

Jungle Stripes has an impressive presentation. When it comes to the gameplay, however, it stays very close to what’s familiar. We don’t really get to enjoy many unique features in this game, rather a mix of tweaks that we’ve seen before.

The vast majority of the time the game will be played on the main screen. I found it extremely hard to get the free spins mode to activate. The scatter symbols themselves were already very rare and getting more than 2 on the screen proved to be impossible.

Fortunately, the base game does keep things entertaining. As rare as the Scatters are, as common are the Wilds. They won’t appear every spin but I would see them regularly enough to be helpful. The added bonus of them triggering a respin is also a welcome feature.

The Wilds only appear on reels 2, 3 and 4 which means you can get a maximum of 3 respins in a row. These respins can help boost your funds by quite a bit considering the Pays Both Ways mechanic. This essentially doubles the number of paylines that are active in the game. During my time playing, I found my funds to stay largely stable. I even won a tiny bit.

Jungle Stripes is a game that looks amazing but doesn’t go out of its way to mess with the status quo. Players that are comfortable playing standard video slots will likely enjoy their time with this game.

The slot isn’t too flashy and doesn’t introduce any new mechanics. The features that are included offer a refreshing gameplay loop without requiring a lot of research. Players can simply sit down and start playing. The features will explain themselves as you go.

The main downside for me was the free spins mode, which proved to be almost impossible to activate. Perhaps having that loosen up a little bit would have been beneficial for the player and the game as well.

Browse casinos with Jungle Stripes and other slots from Betsoft. Create an account and try the game for free before making a deposit.

You can play Jungle Stripes in English, Finnish, Swedish, German and 22 other languages. 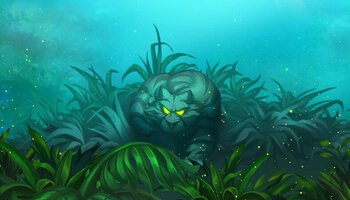