Journey 75 million years into the past with Jurassic Park, remastered by Microgaming in the summer of 2021. The old classic which we all know and love has been given a fresh makeover, making it faster and more thrilling, yet still keeping it true to the original.

Take a huge bite out of history with this 5-reel, 3-row slot and 243 ways to win. Rather than using paylines, way wins payout with adjacent tiles from left to right and multiple wins can be awarded per way.

Microgaming did a great job with the remastering of this title. The imagery looks even sharper, the soundtrack and FX are crisp and when the T-Rex approaches you will feel a chill.

Three or more scatters anywhere on the reels will trigger the bonus round awarding 12 free spins. There are 5 free spins features and one will be randomly assigned to you once the bonus round starts. Free Spins can be retriggered in all the different features and the player will then get to choose the feature they prefer.

The Tyrannosaurus Rex free spins feature consists of stacked T-Rex symbols and the chance for the T-Rex to appear and turn up to 5 reels Wild.

Then there is the Velociraptor feature which comes with multiplier wilds and split wilds. The split wilds will occur on one symbol meaning a 6-of-a-kind combination is possible here. This pays twice the 5-of-a-kind win would. Multiplier wilds can be either x4, x5 or x6.

The Triceratops free spins feature will add an extra wild to the wild stack with every spin. If a non-winning spin happens full stack will hold in place and the rest of the reels will spin. Those that are partially stacked will nudge up or down to create a full stack.

The Brachiosaurus free spins come with a surprise multiplier. A Brachiosaurus will come onto the screen to eat a good chunk of leaves that will reveal a multiplier between x2 and x6.

Finally, there is the Dilophosaurus feature where the dino can appear and turn symbols wild. If these wilds are contributing to wins they will remain in place.

When you receive a T-Rex alert, an extra 35 wilds are added to the reels meaning the chance of winning is greatly increased. This alert mode is active for 6 paid-for spins.

I had mixed feelings about this slot. First up, it’s depicting one of my favourite childhood movies (I was a total dino nerd when I was 10). And I’m always sceptical when studios take themes from movies or TV series and do the bare minimum with them thinking the name is going to be enough to carry the slot.

Thankfully like the original, this slot stays true to the movie. I had such a blast playing it! The imagery is on point, the design of the dinosaurs is meticulously done and the soundtrack still raises the hairs on the back of my neck.

Then there is the mechanics of the game. High volatility is coupled with a 6,333x max win that can happen on any spin (be it base game, bonus round or T-Rex alert). The bonus round was certainly my favourite bit of gameplay. Unfortunately, it’s not easy to get in. And I was slightly bummed I couldn’t choose which feature to play. I was happy to get the brachiosaurus feature which, together with the velociraptor feature, is the one that can yield the best wins due to the x6 multipliers. I ended up winning a decent 59x as I only got a x3 multiplier.

Weirdly enough I didn’t care much for the low bonus win. I was getting quite a few T-Rex alerts (my favourite bit of the game) and even the base game was producing some nice wins hovering around the 15x mark. With the 243 ways to win a 5-of-kind win is not that rare. Apart from that, I was genuinely enjoying playing the game and that’s all thanks to the great work Microgaming has done with the remastering.

Browse casinos with Jurassic Park and other slots from Microgaming. Create an account and try the game for free before making a deposit.

You can play Jurassic Park in English, Finnish, Swedish, German and 26 other languages. 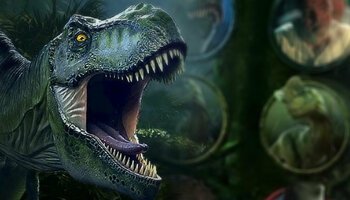