Jurassic World: Raptor Riches is inspired by the famous movie franchise where dinosaurs are brought back to life and put into a zoo. As the park descends into chaos, players are treated to stacked wilds, free spins and 4 different jackpots.

The game was developed by Microgaming and released in 2021, several years after the release of the 2 Jurassic World movies. Although a third one is planned, it hasn’t been released yet. The game is built around a 5-reel, 3-row playing field that holds a total of 20 paylines. So far, not much can be considered very original. What does come across well is the idea of a dinosaur park, especially if you’re familiar with the movies.

In the background, players can see the famous gate into the park with some subtle animations. The playing field itself is filled with original symbols that are related to the theme in different ways. On the left side of the screen is the wheel with bonuses, from jackpots to free spins. Getting this to trigger requires a few scatter symbols on the screen.

I was surprised to hear the music wasn’t based on the original movie soundtrack. It seems like the developers had no link to the movie whatsoever in that aspect. The music we do hear is very slow and sombre, with only a few violins to keep the player company. It would seem logical that it was based on something that sounded like Jurassic Park, but far from it.

Jurassic World: Raptor Riches makes use of a collection of symbols to fill the playing field. These symbols can be divided into three groups. First, there are the high-paying character symbols. Then there are the medium-paying dinosaur symbols and finally there are the low-paying dinosaur icons. Together, they work reasonably well at making the game look interesting enough.

The game comes with High Volatility and an RTP of 96.02%. That’s almost exactly on par for a slot with this difficulty, making it a good game to know what to expect. In my experience, playing this game will result in some smaller wins over time and only very rarely the big wins that help compensate for your losses. However, it’s probably a good idea not to spend too much per spin.

Players will need to stay in the game for quite a while to beat the volatility, which means adjusting their bet to facilitate this. For that, the slot allows players to pick a bet between £0.20 and £100 per spin. This is what most other games also offer. There is a maximum win of 2,500x your bet, offered through the special Apex feature. The only way to get this win is through the Mega Jackpot.

You will find the following symbols in this game:

Jurassic World: Raptor Riches makes use of some simple features to spice up the base gameplay. Their effectiveness can be debated as I found the game to still feel very simple. It does hit all the right notes.

The features include are:

There are a lot of different symbols in this game, coupled with the number of different features that are all separate from each other. During my time playing, it felt like none of the features had a real chance to shine. I only managed to hit the free spins mode once, and I never got to sprint the jackpot wheel.

As a result, the game feels pretty unfocused and bland. There is technically a lot to see and do but since the requirements are very specific, none of these triggers often enough to be interesting.

Jurassic World: Raptor Riches doesn’t quite manage to live up to the expectations that the title set. The game is clearly licensed, using the official logo and different characters from the films. That makes it so strange that they didn’t stick the landing. The music is the biggest mystery, where it would seem using the official soundtrack would be possible. Or at least something that sounds similar.

Instead, we get a rather clumsy-looking slot with no real defining traits. The features work fine on their own but they also fight each other for a place on the screen. As a result, the player gets to enjoy none of them since they keep themselves from activating. It quickly became quite tedious for me to never see anything happen.

The respins are likely the most common feature and they work well. The multiplier also adds some variety. It’s not enough to compensate for the other elements that don’t work as well. If you’re a fan of the movies you might get some enjoyment out of this but the general public probably won’t.

Browse casinos with Jurassic World: Raptor Riches and other slots from Microgaming. Create an account and try the game for free before making a deposit.

You can play Jurassic World: Raptor Riches in English, Finnish, Swedish, German and 26 other languages. 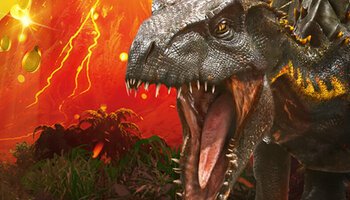