Kaiju is the simple name for giant monsters that come from the ocean and attack cities, mostly in Japan. This slot takes that concept and makes it the focal point of an exciting game with expanding reels and scatter symbols!

The game was developed and released by Elk Studios in 2018, resulting in a very pleasant looking slot. The images are crisp and clear with a beautiful background of a futuristic Asian-looking city. The colour blue is prevalent throughout the game without becoming overbearing. The 5-reel, 3-row playing field is filled with unique symbols that seem to fit the setting at least a little bit.

Kaiju has a whopping 7,776 paylines but those aren’t available all the time as the game relies on the expanding reels feature. The base game has significantly fewer paylines to win off of but the free spins mode can add extra rows to the game, up to a maximum of 6. I didn’t think this was very well explained in the game itself. It required me to dive into the paytable to figure this out.

The music sounds suitably dour and futuristic, playing in the background of the base game. The spins of the reels are a little more energetic, playing electric beeps and jingles to indicate wins. When the free spins mode is activated and one of the Kaiju show up the music does pick up, adding to the sense of confrontation.

The slot has a series of unique symbols that are made to somewhat fit the theme of the game. Taking place in the future a lot of different symbols resemble some sort of microchips or credit cards. These all have their own colour to keep them distinguishable. Other symbols include different gems as well as an unnamed character. Unfortunately, the titular Kaiju only show up during the free spins mode and only in the background. They never become an actual part of the game.

I thought the symbols looked fine if a little simple. I would have hoped the setting of giant monsters would have inspired the creators a little more but instead, they were content to keep their symbols related to credit cards and gems. If during the free spins mode all expanding reels are activated there is an acceptable max. win of 1,304x your bet.

Even though the game has a small number of symbols, I found the slot to struggle with granting me any wins. The listed High Volatility therefor also fits my experience. It does seem odd, considering consecutive symbols are enough to trigger a win.

Kaiju has some interesting features but I’m not sure if they were executed the best way possible. For starters, a quick overview:

By and large, Kaiju plays like a regular slot except that wins are counted based on consecutive symbols. As long as the same symbol appears on consecutive reels from left to right, the game counts this as a win. Unfortunately, even with this feature and a low number of different symbols, it was still difficult to get a win.

Randomly during the base game, a Wild can be added to the slot. Unlike with other games, the Wild is not added to the playing field itself but added to a new row above the existing rows. This makes it possible for multiple wins to be facilitated as numerous symbols can now appear on consecutive reels. During my time playing, I found the Wilds to be the best way to get a win.

It is possible for multiple Wilds to appear on a new row during the base game, but it was sporadic and did not seem to have any particular reason. The Wilds also disappeared again immediately if there was no win.

The Free Spins mode activates when there are 3 Scatter Symbols on the screen. The Free Spins mode starts off the same as the regular base game. There is a Kaiju in the background who looks nice but is completely static and has no impact on the gameplay whatsoever.

It’s possible to add a maximum of 3 extra rows to the game, resulting in a maximum 5-reel, 6-row playing field. These all disappear once the bonus game ends.

Although I did like the idea of the playing field growing during the free spins mode, it was very poorly communicated how this happened. I had to dig through the paytable to get a grasp on things. Another element I thought was underdeveloped was the Kaiju itself. Unlike games like Super Heroes or Wild Worlds where the enemies have something to do, here the monsters just act as wallpaper while the game continues as if they’re not there.

Kaiju is a nice-looking slot that ultimately feels pretty stale and boring. The symbols and art are all nice, the music is suitably atmospheric and even the different features are okay. Unfortunately, the slot underuses the actual focus of the game: the monsters! I didn’t see any animations, no sound-effects related to the creatures and they were definitely not part of the gameplay whatsoever.

As such, the game felt very light on engagement. I was passively spinning the reels, not really paying attention to what was happening since there was so little to see anyway. The occasionally Wild that appeared on top of the reels often disappeared immediately because it failed to trigger a win.

Even the Free Spins mode didn’t manage to hold my attention. The monsters were static, the extra features were only variations of those in the base game. Even the outlook of a big win during this was slim. It all felt profoundly understated. Players that enjoy this type of gameplay will, however, be very pleased to hear that is exactly what it offers. With the ability to pick a bet between £0.20 and £100 it’s possible to augment the risk a little, making for a safe but uneventful experience.

Browse casinos with Kaiju and other slots from Elk. Create an account and try the game for free before making a deposit.

You can play Kaiju in English, Finnish, Swedish, German and 19 other languages. 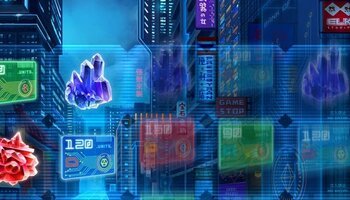