Cuteness and overload are two words that can best summarize Betsoft's Kawaii Kitty. This is a game of five reels and 10 fixed paylines for which I am sure there are some candidates out there. I played the game once to investigate if there is more substance behind the flurry of candy colours and I believe there is.

As someone who likes to enjoy games that have an edgier personality than this, I found myself on the verge of quitting after a dozen spins, but this was my initial impression.

Kawaii Kitty became more inviting once I was able to see where its potential lies. The game comes with two extra features, a double or nothing win option and a two-way-pay layout.

All of the above made sense to try my chances on a medium variance game that has a maximum win potential of only 500x your bet.

The setting of this game is a kitten's paradise, which is probably a little girl's room that has a separate shrine for her cuddly critter. The symbols are various objects that can be used in the nurturing of a cat, including toys, brushes and cans of tuna. It is apparent that the graphic designers at Betsoft couldn't resist adding some Japanese manga features to these objects so they all look like they are in kitty paradise.

Come to think of it, Kawaii Kitty isn't the opposite of entertaining. The cheerful ukulele track isn't too bad, but it could have been composed with another verse to it. Although the standard symbols aren't animated, they do spring into life when they become part of a winning outcome. The effect is again, inspired by Japanese culture because it reminds me of the glaring, flashing lights that are so ubiquitous in Japanese cartoons.

In my opinion, Kawaii Kitty can be saved from infamy thanks to its extra features. There may not be much to boast of In that regard, but the features work in unison with a unique probability engine behind that some players will find as appealing.

Kawaii Kitty has a Wild symbol that always expands across the entire reel upon landing. Sadly, it can't land on the first reel and reel five is ruled out also. The symbol is represented by two balls of yarn (a cat's favourite toy) that weave the word Wild in a pretty visual effect.

This feature is tied with the expanding Wild. Each time you get that symbol the game awards you a respin, with the Wild in place.

This is part of the base game and doesn't need to be triggered. Any three or more matching symbols that land from left to right or right to left can form a winning outcome. This is a very nice touch by the game designers because the expanding Wild can work both ways, thus increasing your chances to land a bigger win.

As I said, Kawaii Kitty has 10 paylines but this doesn't entail bland gameplay. On the contrary and in line with the feature above, the game can pay both ways and that almost feels like playing across 20 paylines.

You can set a coin size between one penny and one pound, which converts to bets between 10p and £10.00 per spin. If anyone wants to play Kawaii Kitty as a high-stakes game, there are a total of ten bet levels where each one multiplies the value of the selected stake.

In terms of symbol payouts, 0.5x your bet is great for a starting payout value. You can get this prize by landing three cans of tuna or three bowls of cat chow. Any combination above three of a kind can pay 1x your bet or more.

These are the payouts for three, four and five symbols of the same kind:

If you aren't taken aback by the fluffy theme, then you may come to find out there is more to Kawaii Kitty than the graphics. I think Betsoft has equipped the game with an amusing mathematical model. Volatility is medium and it shows in the gameplay, but low-paying wins don't tend to be that frequent at the expense of potential medium and big wins.

Kawaii Kitty likes posting reel-stacks of matching symbols. I find this to be a promising tendency which can work like a charm with the expanding Wilds. The big win potential is in landing double Wild reels or a Wild a and another one on the respin.

With this in mind, I don't think 500x your bet for a maximum win potential is an overly exciting sum, but the potential of getting one or more big wins is there.

Browse casinos with Kawaii Kitty and other slots from Betsoft. Create an account and try the game for free before making a deposit.

You can play Kawaii Kitty in English, Finnish, Swedish, German and 22 other languages. 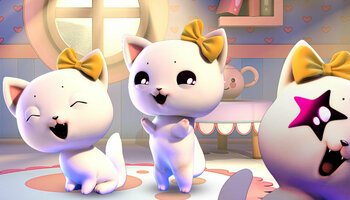