There is a mysterious ruler who possesses decent riches and goes by the name King Colossus.

The figure of a philosopher-king is the most anticipated symbol on the paytable because it can cover 3x3 square grids on the 3x5 layout. If you play the game, you'll have a chance to meet King Colossus during the free spins bonus.

I didn't think much of the game at first. The base game leaves much to be desired in terms of extra features and payouts. There aren't any reel modifiers either, so the only extra help comes from the Wild.

The free spins bonus, on the other hand, can redeem this lack and lead to decent payouts. There are 40 paylines, which I consider to be another plus.

The maximum payout potential of 500x your bet isn't overly attractive, however, this figure falls in line with two details - RTP of 96.57% and medium volatility. King Colossus is a game that can either surprise you pleasantly or, simply said, not do much at all.

Quickpin released King Colossus in 2014 and the graphic design reflects a style that you can call typical for that period. You can see games with a similar look and feel that were made by Red Tiger, NetEnt and other companies.

In other words, what I am saying is that the design is light. There isn't too much going on, just superficial symbol effects and a modest background tune, but it's enough not to bore you down within minutes of playing.

Three bonus symbols can trigger the free spins bonus if they land on the three middle reels. The prize is five free spins plus potential winnings. This number may seem low, but there are a few extra details about the bonus.

In my experience with the game, I got two extra spins each time I won the free spin feature. There is no guarantee that you'll get the +1 Spin symbol, but the game seems to be eager to award it at least once. It certainly helps to increase the odds of winning the colossal symbol.

The 3x3 symbol can appear on the three middle reels in full or partial view. Regardless of the view, the King can connect with the wilds or with its matching symbol kind. Since this is the second-most valuable symbol, the winning outcome can stack to a decent amount.

This is the symbol that can make the free spins bonus worth playing for. The Wild is guaranteed to land in at least two random positions, either on reel one, reel five or both.

It goes without saying that three or more Wilds on reels one and five can make a handsome connection with the Colossal King symbol. This is the highlight of the game and in my opinion the only notable thing about it.

In view of the 40 paylines, the game can take as little as one penny per line, which doesn't make it cheap to play. This means each spin will cost at least 40p. All would be fine if the base game wasn't so weak in terms of payouts.

One look at the paytable and you'll see why. I mean, Quickspin could have given the symbol value structure a second consideration before deciding on 1x your bet to be won back with five matching symbols.

Over at the "high-paying" symbol category, the King barely "rules'' with 2.5x your bet in return for five matching symbols. Strangely enough, both of the symbol categories have the same payout structure.

This is the paytable in its full glory:

King Colossus is one example of a game where the number of paylines doesn't justify the payout structure. There are no two ways about it - winning outcomes for three of a kind aren't going to get you anywhere.

I indeed believe that the bonus feature is a high-potential gig, but you'll be bleeding cash until you get there. This is why I played King Colossus on two occasions - reluctantly - and will probably not play it again.

Browse casinos with King Colossus and other slots from Quickspin. Create an account and try the game for free before making a deposit.

You can play King Colossus in English, Swedish, German, Lithuanian and 3 other languages. 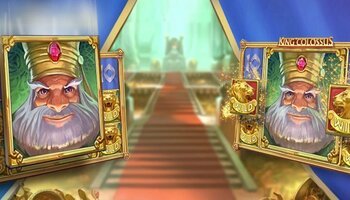