Get teleported to Imperial China to fight your enemies and become a King of 3 Kingdoms. Three feudal lords are vying for the throne, but only in the capacity of high-paying symbols, in a game that has a maximum payout potential of 45,000 coins.

The gameplay takes place on a 3x5 reel set but the payout system consists of 243 ways to win. The latter detail makes the particular layout more exciting compared to fixed paylines, but the game hasn't been designed to blow the minds of any history buffs.

The title “King of 3 Kingdoms” sounded exciting enough to pique my interest and I barged into the game thinking I'm in for a full-blown animated slot. Well, it wasn't quite so.

NetEnt released the game in 2020, but the graphics far from justified my expectations. I was expecting more animation, more flair, but none of it is served.

I have discovered some finer details about King of 3 Kingdoms. First off, the official hit frequency of 42.55% is rarely seen. This immediately renders a seemingly lacklustre release into one you'd consider entertaining for some time.

The second selling point of the game is the bonus feature. Although it is a 'mere' free spins bonus, it comes with a kicker that can pay off handsomely.

The third is simplicity. Yes, the graphic design is quite rudimentary and there is only one feature, but it all makes sense because King of 3 Kingdoms was meant to be a no-frills release.

For the good of the other side of your gaming experience, it’s better that you skip this section as it doesn’t throw any positive light on the matter.

There are six cards’ symbols and four pictures in addition to the Wild and scatter. The highs are represented by three contenders for the throne and a standing army. Sadly, these symbols are as rigid as a still-life painting, but they fit the premise as intended.

The only symbol that can spring into life is the Wild, which depicts a map of China carved by the three warring feudal lords. The graphic design of King of 3 Kingdoms doesn't succeed in tickling your imagination and the soundtrack is virtually nonexistent.

NetEnt has deemed fitting to only include one bonus feature in King of 3 Kingdoms. In addition to a Wild that can only land on reels two and four, the game comes with a free spins bonus which, in my opinion, is what makes it worth playing.

The bonus can trigger with three, four or five scatter symbols in exchange for 15, 20 and 25 free spins, in that order. The golden dragon scatter is a paying symbol that can award you a cash prize 5x, 20x and 50x your bet.

Two things can make it worth playing for the bonus: each winning outcome is paid triple and the free rounds can retrigger by getting another set of scatter symbols.

I was pleasantly surprised by the frequency of the golden dragon symbol. In my experience, it reflects the hit frequency just about right. Overall, the bonus is simple and attractive because of the 3x win multiplier.

Another thing - the same caveat applies to the Wild symbol as in the base game. It can only land on reels two and four during the free spins, but when it does, the 243 win-ways tend to connect at least two matching symbols.

Being a NetEnt game, the total bet amount can be set by selecting your coin value and bet level. Coin values start at one penny per the fixed stake of 25 credits, which means the smallest bet per spin is 25p. The biggest coin value is 50p and betting this to the first level amounts to a bet of £12.50.

The 243 ways to win give King of 3 Kingdoms more flavour when it comes to the gameplay. Landing a winning outcome requires three or more matching symbols on concurrent reels, regardless of the position on the row.

The gameplay can arrange for some rather exciting streaks because the payout levels have been given decent maximums.

The most valuable symbol among the standard symbols is the blue-robed ruler. 1,500 coins is a figure that converts to a value of 60x times your bet.

Expectedly, the cards start off with extremely low values, but these are in respect to winning outcomes for two matching symbols. On the other hand, I should emphasize that winning combinations for four matching symbols can pay your full bet, or exceed that amount.

In comparison to most other releases by NetEnt, King of 3 Kingdoms lacks energy and character. I feel certain that the company made the game to appeal to players who prefer simple game mechanics and in this regard, the product does a perfect job - especially considering its hit frequency is 42.55% and the theoretical RTP is a neat 96.88%. In my opinion, these specs make it worth checking out.

Play King of 3 Kingdoms for free

Browse casinos with King of 3 Kingdoms and other slots from NetEnt. Create an account and try the game for free before making a deposit.

You can play King of 3 Kingdoms in English, Finnish, Swedish, German and 20 other languages. 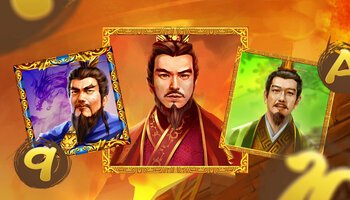