King of Slots introduces us to the eponymous king of slots, presented by his golden crown and spades and clubs tie. That’s quite a title so I’m curious to see his claim on the throne.

If you’ve been up to date with Netent slots you’ll know that King of Slots came out in 2015. Although I played it when it was first released it kind of fell under my personal radar ever since. I’m going to see if that was deserved or if it should come back onto its throne!

With a standard 5-reel, 3-row playing field the game fits the classic slot layout. A respectable 20 paylines gives me enough opportunity to get a few wins, supported by the slot’s Low Volatility. My first impressions now as I had back then were that it is a simple but competent slot, intended for people looking to pass the time playing an easy game.

There’s not much to say about the graphics. The king of slots stands in the corner of the screen watching us play. Although I like his design he does nothing. Even when the Free Spins mode is enabled we don’t see him do anything special.

I thought the soundtrack was a nice fit with the theme. The music in the background has a rather soft jazzy feel while getting wins results in a short show tune-like song. Keeping with the trend of the game it does nothing special but stays close to the relaxed playstyle vibe it’s giving off.

The symbols in King of Slots are what you’d expect. I did like the way the high-paying symbols are designed. The way Swarovski Eggs are based on normal eggs but studded in diamonds is how these symbols are presented here. Things like golden lemon slices and cherries in the form of a pin add to the idea of royalty.

Again, the simplicity of the symbols works in its favour. The whole slot exudes a certain level of basic appeal that isn’t looking to impress with animated symbols or a large assortment of features. Instead, it stays very close to the core slot experience.

King of Slots keeps it simple when it comes to the features but that doesn’t mean there aren’t any. I thought the different features work well together without coming across as overbearing or complicated.

To start off, a quick list of the features:

Although I had the Free Spins mode activate quite a few times, the main focus of King of Slots is the Sticky Re-Spins feature. There aren’t too many symbols in the game which makes a winning payline quite likely and the Sticky Re-Spins were in my experience pretty liberal in adding more symbols. This fits with the reported low volatility of course.

The Wilds were in contrast pretty rare but I can see why since they would be quite extreme in combination with the Sticky Re-Spins. The coin reward for each symbol is pretty low though but that fits the volatility as well.

King of Slots came and went for me when it first came out, and it’s not hard to see why. Compared to other slots developed by Netent the slot stays quite close to the core concept of slots. The graphics are nice but muted, the soundtrack is simple and the features are a good mix but nothing extraordinary.

It’s a game that easily gets lost amongst the avalanche of bigger and more exciting slots. That doesn’t mean it’s a bad game, however. Many people enjoy a simpler, quieter game experience and in that aspect King of Slots absolutely delivers.

People who are looking for a nice, relaxed game that will keep them entertained for a while would do well trying out King of Slots. Its volatility means that there is a tidy stream of wins, while the Free Spins mode activated often enough for me to stay interested. Players can bet between £0.25 and £250 per spin, combined with a max. win of 3,000x your bet means it can get pretty interesting pretty fast.

In many ways, it reminded me of another Netent classic, Flowers, which also did not delve too deep in trying to unearth new gameplay mechanics and features. Instead, both slots offer a steady but unsurprising game experience. Outside of Netent’s stable, I thought Winterberries by Yggdrasil had many similarities, down to the Sticky Re-Spins.

Play King of Slots for free

Browse casinos with King of Slots and other slots from NetEnt. Create an account and try the game for free before making a deposit.

You can play King of Slots in English, Finnish, Swedish, German and 20 other languages. 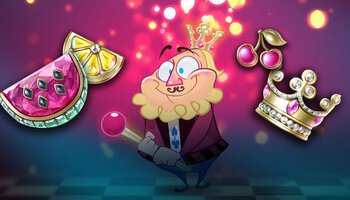