Kings and Dragons Dice brings us to the fantastical medieval time where royalty would duel ancient lizards for the hands of princesses and big treasures. In this slot, players are aided with Paylines Both Ways, Free Spins and a Bonus Game.

This slot was developed by new developer Mancala Gaming and released in 2020, making it a very recent example of what this studio can do. The game features a 5-reel, 4-row playing field with a decent 25 paylines, combined with the Paylines Both Ways feature that essentially doubles the number of bet lines.

The graphics I found acceptable without being anything to write home about. Where the graphics for their other slot Huge Catch were actually quite good, here I found the details to be lost in the use of the dice symbols. I did like the background, showing different characters, namely different kings and dragons from opposite ends of the world.

In terms of the sound design, I was actually quite impressed. It features a rather daring medieval song playing in the background using drums and trumpets, while the reels sound like galloping horses. If there’s a win we’ll hear the trumpets again, this time blowing a victory tune. All in all, it fits the setting quite well even though the song started to sound repetitive after a while.

The game features a number of different symbols, most of them a variation of dice with a different image posted on the side. When there’s a win, these images fill the tile with a brief animation. It’s nothing special but it makes it a bit clearer what the win is and where it is on the screen. I did miss that it didn’t show the total coin win on the screen but rather in a tiny font in the corner of the slot.

As a player, you have the option to pick a bet between £0.25 and £22.25 per spin. If you get the right symbols to appear, you can get a max. win of 2,555x your bet. This is the same as you would get at Huge Catch, which makes sense since both slots resemble each other a lot.

Kings and Dragons Dice does not take too many chances when it comes to the features. Instead, it sticks close to what is familiar to most players and offers them up in an easily digestible way. This makes this slot an excellent entry-level slot for players with little experience playing video slots.

The features you’ll find here are:

Most players will be intimately familiar with all these features, some being more common than others in video slots. The main feature that will be present most of the time is the Paylines Both Ways, which make the bet lines count from left to right and the other way. This essentially doubles them.

The second-most common feature to appear was the Bonus Game, triggering as soon as a Chest Symbol appeared. Since it only required one and the Chest was fairly common it would come into play often. When it does, the game pauses and they’re presented with a choice of 5 cards.

The cards can hide various coin values as well as a random number of free spins. Depending on the player’s choice the win is awarded immediately. The coin wins were a nice bonus but the real appeal were the free spins.

Whenever the player picks these, the Free Spins mode starts just as it would if 3 or more Free Spins symbols appear on the screen at the same time. The spins don’t get any extra bonuses or special boons and I found them to often be less than impressive, but it was still a source of coins.

The Bonus Game appeared more than the Wilds, even though those also showed up regularly. With the paylines counting both ways this did help in creating bigger wins, but this still kept it on a Low Volatility.

With the few Mancala Gaming slots I’ve played I’ve already started to detect a pattern. The slots all have largely the same features which make for a nice if unoriginal game experience. Players are using features that are very popular and are easy to understand.

The graphics are definitely acceptable for a new studio, even though they don’t make full use of what’s possible now. Considering the size of the studio it is an understandable decision not to focus on cutting-edge graphics. In the same vein, the sound was nice but simple.

If you’re looking for something entertaining but not overly complicated while still offering some good features, I would recommend Kings and Dragons Dice.

You can play Kings and Dragons Dice in English, Swedish, Spanish, Italian and 4 other languages. 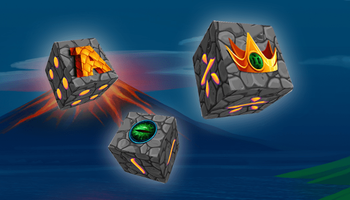