Kitchen Drama: BBQ Frenzy considers the exciting life of all the food that’s thrown on the barbecue during one of those hot summer days. It even lets us profit from it!

Created by No Limit City and released in 2017, Kitchen Drama: BBQ Frenzy is the twin of Kitchen Drama: Sushi Mania which came out the same year. Both games present us with a cooking area on which we watch different types of food get prepared and maybe granting the player some big wins.

Kitchen Drama: BBQ Frenzy takes place on a 5-reel, 3-row barbecue, with 20 paylines to play with. The reels are filled with different types of food as well as some coal to fill out the collection. Everything is drawn in a comic-book style, all the symbols are humanized with different faces and there are quite a lot of animations to fill it out.

The symbols all use their tiny legs to jump on and off the barbecue and when they’re part of a winning payline we see them burst into flames and crumble into dust! When the Fiery Chili feature is activated we’re presented with a quick animated screen and the free spins mode also has a special series of symbols we don’t see in the rest of the game.

I thought this was all done amazingly well, with each symbol oozing character and making it feel alive. The game has relentless energy to it and even though the screen could get quite confusing because of the large number of moving parts, it did a good job at presenting its information.

All the symbols in the game are made to fit the theme, divided between different foods and different types of charcoal.

The high-paying symbols all look very different, not only are they easily recognizable but they’re also different colours. The 3 types of charcoal are harder to distinguish with only the shape being different. Since they’re all black it’s harder to tell.

Kitchen Drama: BBQ Frenzy offers quite a selection of features, including multiple different Wilds as well as a free spins mode. To start with, a quick rundown of the features:

Getting cascading wins did a few things. The first thing was that it filled the Fiery Chili Spirit Spin counter to the right of the screen, which required 3 wins on a single spin to activate. When it did, it would randomly pick a symbol and turn it into a Wild for 1 spin.

The second thing, free spins mode, depended on which symbols were part of a spin. When the Steak, Green Pepper and Mushroom were part of wins in a single spin, the Free Spins mode activated. It was possible one of these would randomly activate, only requiring the player to get another 2 wins.

Even though this sounds extremely specific and difficult to accomplish, I had them trigger quite often. The Fiery Chili Spirit Spin can activate whenever a Sheriff Badge Wild appeared too, and with the random activation of the Free Spins tracker, it helped in getting free spins as well.

Kitchen Drama: BBQ Frenzy has an incredibly unique concept that still works extremely well and is very fun to watch. The game is flooded with beautiful and animated symbols that give a lot of character to the slot. It honestly puts a lot of bigger developers to shame with how much attention was put into bringing everything to life.

The game offers the ability to choose a bet between £0.20 and £100 per spin, and a max. win of 1,050x your bet. Coupled with the Medium Volatility I found it to be very lucrative.

If you’re the type of player that is looking for an original slot with amazing graphics and some modern features that don’t stray too far from the classic experience, I’d say you can’t go wrong with Kitchen Drama: BBQ Frenzy. It has some of the funniest animations I’ve seen in a slot but it also uses the normal playing field and gaming conventions most people prefer.

Even though the game is getting a little older I imagine it’ll keep me entertained for a few years yet and the great collection of features will definitely help with that.

Browse casinos with Kitchen Drama: BBQ Frenzy and other slots from Nolimit City. Create an account and try the game for free before making a deposit.

You can play Kitchen Drama: BBQ Frenzy in English, Finnish, Swedish, German and 12 other languages. 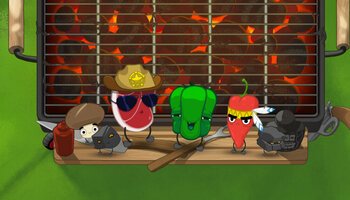