Knights brings to life the time of brave soldiers, mysterious wizards and grand castles. Ride into these medieval lands and bring back your own treasure.

This slot was developed by Red Rake Gaming and released in 2019. This makes it one of the newer slots out on the internet right now. The game is clearly set in a medieval time of Knights and wizards, with inspiration drawn from Arthurian legend without being too obvious about it. It’s built up out of a 5-reel, 3-row playing field with the unique ability to expand to a 6-reel and 3-row playing field! It has 5 paylines.

I am a visual person and the first thing that struck me is that the 3D graphics of Knights don’t really live up to my expectations. Now I know that I’m spoiled for choice when it comes to playing slots from high-end developers like NetEnt and Yggdrasil. These two are able to bring to life characters and locations with amazing detail. Knights, unfortunately, doesn’t live up to that ethos for me.

The 3D graphics in this slot remind me of the graphics old slots used to have. Ghost Pirates is a good example, which came out in 2009. The images are flat and shiny, seemingly rendered in five minutes, which isn’t fair because I’m sure it took a long time to create. They are animated, however, and those look good. It’s just a shame that in my eyes the graphics don’t really keep up with what other developers are capable of nowadays.

The sound design is simple, not having any music but mainly some sound-effects for the different factions of the game. Spinning the reels has a simple thumping sound, getting a win results in hearing coins drop. It’s all very basic.

The game has a normal division between high-paying original symbols and low-paying card symbols. They are all created to fit the narrative of the slot but the card symbols still feel out of place. The symbols are lightly animated when they’re part of a winning payline which I appreciated.

The symbols are all very colourful but stay distinct enough to be easily recognisable, letting you quickly see if you got a win or not. The animations are short but sweet and help give the game some movement.

Knights has a short list of features that nonetheless do quite a lot to spice up the base game. I found them to work well together.

Probably the most notable addition to Knights is the ability to ‘buy’ the 6th reel in the game. It slightly raises the bet per spin but unlocks an extra reel. Doing this makes it more likely to get an additional Scatter symbol as well as the opportunity to get six-of-a-kind wins which award the largest payouts.

The Wilds operate much like normal, substituting all other symbols in the game except the Scatter. When you get a win with a Wild it will add a 2x multiplier! It’s a nice addition to the feature that didn’t really have to be there to pay off but it can help a lot.

The Scatter Symbols in the game have their own value and can result in a payout with only 2 symbols, but it won’t start the Free Spins mode unless there are 3 or more Scatter symbols on the screen. With 6 Scatter Symbols, you get 40 free spins to play with. It’s possible to get additional Scatter Symbols during the free spins mode.

I found the features to be a pretty nice combination even though they don’t do that much new. Adding another reel to the playing field is something players can be pretty divided on. While it does unlock more opportunities, it also requires you to pay more per spin. It’s hard to tell if it’s worth it since the game has High Volatility and adding another reel doesn’t really help in dealing with that. In my time playing, I never saw a six-of-a-kind win. I felt its main purpose was to give the player an extra chance at getting another Scatter symbol.

For me, Knights felt very much like an older NetEnt slot. It has the same graphics, the same style and even a few of the features that classic NetEnt games used to have. Does that mean we’ll consider RedRake Gaming one of the top slot developers in 10 years? Or are they simply copying a tired model? Only time will tell.

Just because the graphics aren’t the best and the music is lacklustre does it mean the slot is bad. The features work well enough even though they don’t do anything special, but the extra reel as an option is an interesting take. I found it difficult to decide whether it was worth it though.

If you’re looking for a slot that lets you explore the Kingdom of Camelot and see if you can find the Holy Grail, Knights will probably help you do that. It’s a classic slot in many ways with some added features for people that enjoy more modern slots. If you don’t care about playing a game with the most up-to-date graphics, it’s a very solid game.

Do you prefer top-of-the-line slots that incorporate the newest techniques and go out of their way to introduce unique features? Then Knights will probably fall short.

Browse casinos with Knights and other slots from RedRake Gaming. Create an account and try the game for free before making a deposit.

You can play Knights in English, Finnish, Swedish, German and 19 other languages. 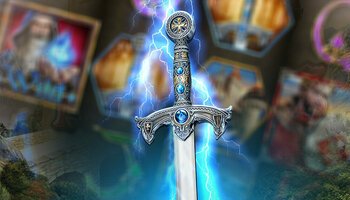