There is no need to travel to the Far East to experience the wonders of the Orient. NetEnt slot game Koi Princess delivers a fully-fledged slot game in a classic Japanese anime style, reminiscent of Japanese cult cartoon favourite Sailor Moon.

When I opened this game, I was whisked away to many years ago, when I was still a young girl watching Japanese cartoons. This game encapsulates that nostalgic time with much fervour.

We don’t quite know the story behind this slot game. All we know is that NetEnt wanted to create the perfect ode to Manga. For those of you who are not familiar with this term, Manga refers to comics created in Japan conforming to a style developed in the late 19th century. So, it comes as no surprise, that Koi Princess is the epitome of Manga cartooning, and a slot dedicated to this art that celebrates Manga in all its glory is well-deserved and much welcome.

Spread over five reels, three rows and 20 fixed pay lines, the Princess herself supports and cheers you on as she stands to the left side of the reels. Dubbed as ‘the most feature-packed slot we have ever made!” by its creators, you might have to be the judge to whether this rings true.

That being said, while playing it, it was quite apparent that it’s a game you can easily get hooked by. It’s not just the features, but the oriental imagery and the traditional soundtrack. The soundtrack itself is very relaxing and zen-like.

When it comes to the graphics, the slot game evokes memories of 80/90s Japanese cartoons or anime comics. There is a lot here to take on, without being over the top or flashy. With a fusion of Eastern Asia influences, including the stunning scenery of the temple and the well-kept garden, together with oriental music accompanying the gameplay, this is a game that heightens all senses.

Symbols & Features From the first look, it appears that there’s nothing special about the game in terms of interface. Icons featured on the reels are closely related to the theme, essentially a variety of Japanese-influenced symbols.

As previously mentioned, Koi Princess is chockfull with features, which it all kick-offs by a striking feature known as the Bonus Bet. This button, once activated, on the bottom-right corner doubles your overall bet. Most importantly it enhances your chances of activating a random feature during base gameplay.

In total, there are four random features that can be triggered:

Bonus Features in Koi Princess The Bonus features are triggered by landing thee bonus symbols on reels one, three and five. Should only two crop up, the third might be bumped into view.

In Conclusion Mentioning all the features within this article has been exhausting, but what a game! Built to provide thrills and exhilaration, it ties in perfectly with the theme, and in terms of execution.

With an RTP of 96.23% and of medium variance, Koi Princess isn’t the type of game I usually go for. However, the features succeeded in captivating my attention, thanks to its multipliers, stacked wilds and free spins galore.

In terms of deliverance, NetEnt wasn’t joking around about creating a feature-rich game. Go on, give it a go!

Browse casinos with Koi Princess and other slots from NetEnt. Create an account and try the game for free before making a deposit.

You can play Koi Princess in English, Finnish, Swedish, German and 20 other languages. 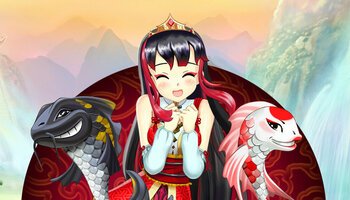