Labyrinth of Knossos delves deep into Greek mythology to recount the tale of the Minotaur and Theseus with some great cartoon-like graphics and a series of features, including multipliers, free spins and Wilds.

This slot was released in 2021 by Yggdrasil and shows off their impressive visual abilities as the game has a tonne of style and detail in its graphics. I found it to remind me of different mobile phone games, where the exaggerated shapes and angular drawings really help in creating a sense of action and character. The game features a 5-reel, 3-row playing field with a number of symbols that are based around the myth, as well as the more regular card letters.

I thought the number of animations in the slot was rather impressive, with all of the high-paying symbols having their own unique animations when part of a win on one of its 243 bet lines. The background shows us a portion of the labyrinth, lit up with blue torches but other than that very static. The game feels very polished and all of the elements that make up a slot have their own shine to it, keeping me engaged the entire time I was playing.

If we listen to the sound, it has received a similar amount of attention, bringing an epic-sounding song to play in the background of the base game. The reels come down with a heavy thump and wins are emphasised with a simple but clear jingle. When the free spins mode activates the song kicks it up a notch, making it clear you are potentially looking at some big wins.

Labyrinth of Knossos uses symbols that are in some way related to the myth, from Theseus and the princess Ariadne to a sword and shield. The lower-paying symbols are card letters that fit the same cartoon style but I didn’t think were a good fit for the setting of the slot.

Players can pick a bet between £0.20 and £60 per spin as they try and get a handle on the game, considering the game has High Volatility. While I played the slot it would grant me small wins now and then but sizeable wins were very much spaced out and it made it difficult to keep my funds positive. Reducing your bet will also reduce the size of any wins but obviously help with playing for a longer time.

If the game decides to grant you a big win, the maximum win can be up to 4,679x your bet. This is about the average for slots with this volatility, so if the jackpot is the main reason for you to give a slot a try, know that many other slots will also offer this. Players who just enjoy the gameplay will obviously like the opportunity at the jackpot but I wouldn’t consider it plausible.

The symbols you can find in this Greek-themed slot include:

The payouts for longer bets are higher but they are unlikely to trigger because of the larger number of symbols. Players should count on mostly three-of-a-kind wins which will often not be enough to pay back a single spin. The volatility comes into play here and is why the game requires the free spins mode to activate.

Labyrinth of Knossos keeps things pretty simple when it comes to the features, even though I wouldn’t call it boring. The features are popular enough to be familiar, but the way the game handles multipliers is rather unique.

In a quick overview, the features include:

Although this can increase the size of the payouts, the ability to get a win is pretty difficult and since the payouts are so low even the bigger multipliers are rarely enough to make back more than a few spins.

Labyrinth of Knossos is a cool game with a great sense of style. The graphics look amazing, especially in the cartoon-style that was picked. I think this choice gives the game a good opportunity to differentiate itself. The fact the symbols are animated as well goes to show that Yggdrasil still has a knack for this type of thing.

The features aren’t as impressive but they work well. Using a standard collection of features was a smart choice, giving players a solid base to start off with. The only real change to the standard formula is the way the multipliers are applied, automatically making a win bigger and adding to the volatility.

If you enjoy good-looking slots or you would like to play a slot with a heavy focus on multipliers you can’t really go wrong with this game. I did find the volatility to be punishing and my funds struggled to stay on the level I started on.

Browse casinos with Labyrinth of Knossos Multijump and other slots from Yggdrasil. Create an account and try the game for free before making a deposit.

You can play Labyrinth of Knossos Multijump in English, Finnish, Swedish, German and 18 other languages. 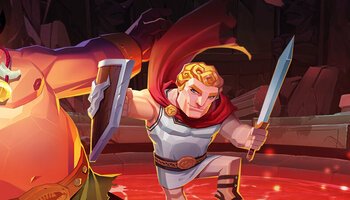