If Lagertha were around in the 21st century, she would probably be known for turning all the glass ceilings in the world into salt, just by giving them a long cold stare.

But this game is about Lagertha in her natural guise, as a woman warrior, which can help her duke it out against the random number generator and get to the player winning outcomes of up to 400x your bet.

So who exactly is Lagertha and why is she deserving of her name being immortalized in an online slot?

For starters, historians think Lagertha was one of the fiercest women warriors in the world. She had become a queen who ruled over a sizable territory in the Nordics - not a small feat considering that part of the world was an arena for many Viking clans. I can just imagine sweet Lagertha ordering men around for groceries, yarn, flowers and piked poles for the battle barricades.

Fugaso has succeeded in grasping the atmosphere of a Viking mess-hall. The reel set is an arsenal of weapons and armour, but the game's extra features have Lagertha's benign and, shall we say, more sensible side as she can take up the entire reel in order to help the player make better wins.

I can say that I like the gameplay, as there are few features that can make the game both playable and exciting. First off, the reel set of three rows and five reels has 20 paylines that are selectable, so if you like to just bet a petty coin per spin and allow the game to surprise you, it can be easily arranged. Then there is the progressive jackpot, which is a long shot but not thoroughly out of question, and last but not least, Lagertha has a free spins bonus.

Even though the design feels a bit bulky and the reels don't spin in a smooth way like slots made in 2020 do, you can still enjoy the gameplay. Lagertha the online slot was made in 2017 and the age shows on the overall look and feel of the graphic design.

On the first appearance, the screen seems a bit cluttered. The paylines are annotated by numbers on the sides of the reel set and there is a set of buttons and displays that feel bulky. All is fine by me.

I've played slots that have the Viking world as a theme, such as Vikings by NetEnt, are a lot better in terms of graphics. But this game has that "old is gold" feel to it that I can appreciate sometimes.

Fugaso has scores of slots that are pretty simple when it comes to the extra features. The game at hand comes with a free spins bonus and a wild symbol.

As I said above, the game has 20 paylines that are selectable, so players can spin the reels across one or five or ten or more paylines, or any number for that matter. This impacts the cost of the bet, which is extrapolated from coin values that start at one penny per payline.

I chose 80p per spin as I was playing the game the last few times because I think it's a sensible amount that reflects stronger payouts. You can view the exact amounts that you may win from the game from your selected bet.

I am happy to say that Lagertha scores high in my book because every single one of its symbols is a paying symbol. The scatter pays 160x, 16x and 1.6x your bet for five, four and three of a kind. The wild is another high-paying symbol that has values of 40x, 20x and 4x your bet.

An assortment of swords, daggers, crossbows, battle axes and shields pays between 0.40 for three of a kind and up to 24x your bet for five of a kind. The mean Viking holding a broadsword can pay 32x, 10x and 3.2x your bet.

The payout structure is the true reason why I think it can be worth playing Lagertha. With it, the game beats most other contemporary slots that are marked by many extra features, such as multipliers and reel modifiers, but significantly smaller symbol payouts.

Also, there is the x-factor of surprise of chancing upon any one of the three progressive jackpots. I never count on it, as the odds are just wildly against you, but this is a game of chance after all so why not let that be as it may.

Can I recommend Lagertha the online slot? For all the reasons above - yes, but beware perfectionists, because the graphics may easily underwhelm you.

Browse casinos with Lagertha and other slots from Fugaso. Create an account and try the game for free before making a deposit.

You can play Lagertha in English, Swedish, German, French and 7 other languages. 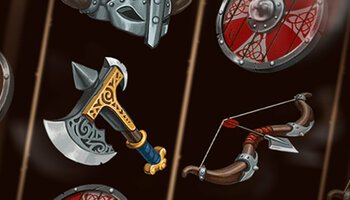