Lake’s Five is a satire of Ocean’s Eleven, replacing a slew of highly paid actors with a small group of cartoon animals that will work together to pull off an amazing heist. The game helps out with Sticky Wilds, Free Spins and Walking Wilds.

The game was developed by Elk Studios and released in 2018, making it still one of the newer slots and showing off some amazing graphics. The designers clearly had fun designing this 5-reel, 4-row slot with respectable 178 win lines. Players are treated with a grand overview picture of the city the heist is taking place as a background, giving us some context and showing off some great art.

When it comes to the team, all five of them are quickly introduced during the intro before the game starts proper. The graphics are lively and colourful, with all the symbols hand-drawn. All of the characters have a clear colour scheme, look different and have their own personality. Unfortunately, they don’t have any animations when part of a win but that doesn’t diminish the effort that went into it.

All of the symbols are original and in some way related to the idea of a heist, even though some might be a little weird. The most original one is the diamond inside the fishbowl, which makes more sense when we know that one of the characters is a goldfish.

Lake’s Five is a High Volatility slot that brings players into the planning stages of a big heist. There are quite a large number of symbols in the game, which all have reasonably low payouts. The game requires either a number of wins at the same time through the different types of Wilds or for the player to activate the free spins mode.

Players will be required to adjust their bet according to their funds in order to make sure they last long enough to hit a big win. The game allows players to choose a bet between £0.20 and £100 per spin to find one they are most comfortable with.

The game further offers a max. win of 2,160x your bet which I didn’t think was especially high considering the rather punishing volatility. The game should give out more consistent big wins in order for the low odds of winning the jackpot to be worth it. In my time playing, I had my funds drop rather quickly and showed little sign of picking back up, with only a rare bigger win to even compensate for my losses.

To begin with, a quick overview of the features:

While most of the game takes place on the main screen, most of the features are hidden in the free spins mode. This is what makes the slot so volatile as it requires this mode to activate in order to have a shot at a big win. Even then, the game puts some hurdles in front of the player that prevent them from using the special Wilds in the game.

As a result, players will spend their time looking at the base game which occasionally triggers a re-spin by getting two scatters on the screen. This was not as rare as the free spins mode, which requires 3 scatters, but still didn’t happen as much.

What I did like was that the 2 reels with the scatter on them move down one per spin, which means the re-spins last until both scatters have disappeared off the screen. It also means that getting another scatter on any of the 3 other reels will trigger the free spins mode anyway.

The free spins mode has reels 1, 3 and 5 designated as special reels which each require 3 keys to unlock their wilds. Keys only count for the reel they appear on. When I played the game, I never managed to get 3 keys on a single reel and as a result, never activated any of the special wilds. This makes it even harder to get a big win and adds to the high volatility.

Lake’s Five as a slot is a very nice-looking game that makes excellent use of the technical possibilities of modern slots. The graphics are sharp and detailed, the game makes use of subtle animations in the background and the game both has an intro and a cutscene for when the free spins mode is activated.

The problem is that the features in the game are hard to activate and as the player gets deeper into the game this keeps getting harder. The re-spin feature still activates now and then, the free spins mode is rare, and I didn’t manage to trigger any of the special wilds even once during my time playing.

As a result, the game feels very punishing and I don’t think even unlocking the wilds will grant a win so big that it makes back all the funds you needed to get to this point. Unless you are a power player I would recommend you only try out this game to experience the setting and theme, but it’s unlikely to be much fun for casual players.

Browse casinos with Lake's Five and other slots from Elk. Create an account and try the game for free before making a deposit.

You can play Lake's Five in English, Finnish, Swedish, German and 19 other languages. 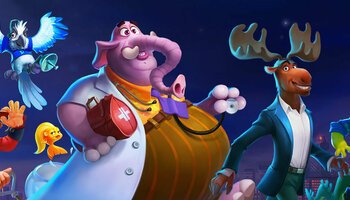