Laser Fruit is an upbeat and fast-paced slot game, which can offer over 60K paylines to keep you on your toes. With wild visuals, the slot succeeds in reminding you of nostalgic arcade games. It takes us back to what it was like to party all night long, and flooding the dance floor (of course, some of us still are!).

At first glance, Laser Fruit didn't really strike me as anything more than a traditional slot with nice visual effects. But when I hit the play button, the energetic music immediately pumped me up with adrenaline! As did the random lasers, to which we'll get back to later. The 2018 game by Red Tiger truly shows what this developer can do.

Red Tiger has shown a lot of improvement over the last few years and really started to fight in the big leagues. They have a knack for visually enticing games, where the player gets sucked in by appearance alone.

I love the general feeling and the artistic design of this slot. It's so full of energy when it spins, especially with the turbo speed on. At that point the background music mixes perfectly with the jingles and thrills of the game itself. The sound design earns high praise, no questions asked.

Though there is a slight generational gap in auditive experience here. For the 70’s and 80’s kids, this game will bring back the world of arcades. Others might find it resembling TV quiz shows.

So, let's get to know the game itself. It has five reels, three rows, and very pleasingly, 243 paylines. Practically this means that when you get more than one matching symbol on any row and at least reels 1, 2 and 3, you win. Because of this, I found the slot to be easier to read than, say, slots with 25 paylines.

The soothing ambience music changes swiftly into the exciting techno-like beat as soon as you click on the spin button. Remember the lasers I mentioned in the beginning? They can be seen randomly crossing the reels during the spin. Sometimes they surprise you by expanding the reels or rows to fit extra symbols. This is the engaging mechanism of Laser Fruit that can grow the number of symbols to 700 and the paylines to over 60,000 lines. This was one of the most interesting features for me.

When the lasers activate, they show glowing arrows where the lasers are going to expand and where the new symbols are added. After the spin is complete the arrows push reels and rows to where they're pointing by one square. With this, you usually end up with nothing less than an interesting layout. Some reels reaching higher than others and some rows stretching wider.

But, I've only explained the main game so far. Laser Fruit also has a compelling free spin feature, which requires the appearance of at least three Scatters. When this happens, you're rewarded with a random number of free spins. Sadly, though, this is where the game lost a bit of the love I had developed for it.

Getting to know the symbols doesn't take too long. The game doesn't have any wilds at all, and only one Scatter symbol. Of the regular symbols, that shine like neon signs, the most valuable are the flaming 7, golden bell, triple BAR, and single BAR. Ten flaming sevens being the best one of all and paying 25x your bet.

Based on these features and math, the player theoretically could gather up to 500 free spins with just one go. But, being realistic, that's highly unlikely. What is true, though, is that the best chances of winning big is through the wheel of luck. Getting to play free spins with the possibility of hitting 10,000x your bet is what you should be aiming for.

The free spins are a bit hard to trigger, but what's worth noticing is that it's easier to retrigger them during the feature. As the expanded reels and rows don't reset until the feature ends, the player has more chances of landing three Scatters.

I truly enjoyed seeing my playing field expand with more and more symbols fit on the screen. There aren’t many games that can get out of hand this fast.

In some way, Laser Fruit reminds me of Twin Spin, a slot game by NetEnt. Maybe because they both have the same kind of energetic feel, and also because both of them resemble classic slots.

The game has high volatility and not too shabby RTP of 96.02%, so it can offer some massive wins with smaller bankrolls. But, in my experience, this game does require the player to have deep pockets or be very, very lucky.

The usual winnings in the main game were more or less around my current bet. Biggest wins barely got over 50 times the bet. Nice, but nothing to really write home about.

What I don't like is the wheel of luck before the free spins feature. I noticed that the number of spins marked on the wheel can differ greatly. It can decide that the maximum number of spins this time is 22, and next time it's only 15. When the player knows that it's possible to win 50 spins, it's pretty frustrating when that option isn't available every time.

Despite not landing anything big, I thoroughly enjoyed playing Laser Fruit. I love the music, bright colours, and the excitement when lasers come along and add symbol places here and there. Especially during free spins, making the odds of winning even better.

If you love dance music and fast gameplay, I think Laser Fruit might be something you'd find very entertaining.

Browse casinos with Laser Fruit and other slots from Red Tiger. Create an account and try the game for free before making a deposit.

You can play Laser Fruit in English, Finnish, Swedish, German and 18 other languages. 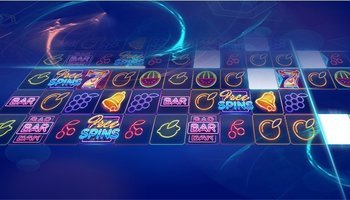