Lava Loca imagines a place out in the Caribbean, perhaps on an isolated island where an indigenous tribe worships a volcano and it might erupt with wins!

This slot with a series of highly colourful and original symbols was created by developer Booming Games and released in 2018. The game takes on a tropical setting, taking inspiration from Hawaiian culture with Tiki statues and Tiki torches framing the 5-reel, 3-row playing field. Just as with most of their slots, this game has 20 paylines.

I felt like the graphics of this slot were a lot better done than many of their other games, having a little more personality than most and with a whimsical nature. The background is quite disappointing in contrast, a barely visible and minimalistic rendition of a sandy beach.

Of course, this setting is popular among many developers which is why there are quite a few similar slots available. One of them is Spina Colada by Yggdrasil, which has better graphics but essentially the same gameplay. Meanwhile, Aloha! Cluster Pays by NetEnt might be one of the most popular games in thetropical island setting.

The music is very acceptable despite being rather unoriginal. It plays something, everybody associates with tropical islands, consisting of a lot of drums, maracas and guitars. In contrast, the wins were accentuated by a short jingle that didn’t fit the theme. When triggering the free spins mode, I was treated to a different tropical song which helped keep things interesting.

The symbols in Lava Loca can be divided into low- and high-paying symbols. The high-paying symbols are original drawings based on Tiki masks, each with their own expression and appearance. Having their own colour also keeps things clear. The low-paying symbols are unfortunately based on the high cards that we’re so familiar with, but at least they were designed to fit the theme somewhat. These symbols look like they’re made out of wood with flowers added to help in setting the mood.

The symbols show a simple animation when they’re part of a winning payline, with the Tiki masks moving a bit more compared to the high cards.

As always with Booming Games slots, there are a few features in Lava Loca that are almost the standard when it comes to their games.

Most players will be aware of the individual features of this slot. The game is not difficult to get into and it’s easy to pick up and play. The base game only has the Wilds and Multiplying Wilds to deal with, both of which show up randomly and can help in getting a win.

I found the Wilds to show up pretty regularly, at least every couple of spins. The Multiplying Wilds were a lot rarer, showing up only once every fifty or so spins. Even then, there would be times where they didn’t contribute to a win. I found this feature to be rather disappointing.

When we get to the Free Spins mode, things get more interesting. At the start of the mode, there is a cube spinning around. Pressing Stop will freeze it on one of the symbols, making this symbol an Expanding one during the Free Spins mode.

While the free spins were spinning, the symbol that was selected could become expanding but it didn’t do it every time. I’m not exactly sure what triggered the feature since it could help in getting some big wins. In fact, I found the Free Spins mode to be the prime moment to increase my funds to the point that the base game was just a way to get there.

Lava Loca is one of the prettier slots in the Booming Games assortment with a feature that really helps to get big wins. The Medium Volatility fit the slot in that way since the base game offered few and smaller wins while the Free Spins mode would suddenly create quite a leap in coins.

The designers of Lava Loca seemed to have spent more time working on the different symbols as they actually look decent and fit the theme. The soundtrack might be a bit on the surface but sounds excellent and made me feel like I was actually on a tropical island.

If you are interested in a classic slot with updated graphics and some simple but effective features I would suggest you give Lava Loca a try! Pick a bet between £0.01 and £200 per spin and go for the max. win of 1,303x your bet.

Browse casinos with Lava Loca and other slots from Booming Games. Create an account and try the game for free before making a deposit.

You can play Lava Loca in English, Finnish, Swedish, German and 23 other languages. 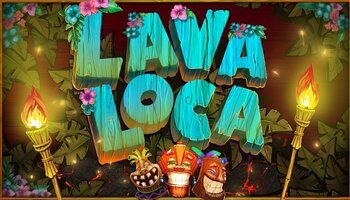