Play Legend of the Golden Monkey

Legend of the Golden Monkey uses the ancient legends of the Monkey King as inspiration for an energetic and colourful slot.

This slot puts us in the heart of China, minding an old temple that is frequently visited by the titular Golden Monkey. We watch the 5-reel, 3-row slot with 243 ways to win dispense a colourful range of symbols to see if we can appease this whimsical being.

Yggdrasil released Legend of the Golden Monkey in 2016, which was one of their most productive years. It seems the developer was intent on trying out a wide range of features and types of games.

Some of them were amazing, like Legend of the White Snake Lady, others were maybe a bit bland like Wicked Circus. Legend of the Golden Monkey falls in between these in my opinion. While it has more character and creativity than most slots by other developers, in comparison to the other Legend game they released that year I thought they skipped some steps.

Graphically I can’t say anything bad about this game. The symbols are original and the high-paying ones are slightly animated when they’re on a payline. The background fits the style well and immerses me in the Chinese setting.

What really deserves special mention is the Golden Monkey itself. Fully animated and very energetic, he occasionally jumps into view to kick a Wild onto the reels or does a thumbs up when I got a big win! I wish we could see more of him, but it’s already impressive how mobile he is and it must have been a huge amount of work.

The symbols in the game are largely in the setting of Chinese folklore. All the symbols are also related to Chinese culture.

I thought the symbols were pretty as I’ve come to expect from Yggdrasil. They have a little animation when they’re part of a winning payline but it’s honestly not that much.

Legend of the Golden Monkey has a fair few features that largely work well together. Many of these make frequent appearances in Yggdrasil slots so you might already be familiar with them.

When you trigger the Free Spins mode you get to choose between the Incremental Wilds, Stacked Wilds or Starting Wild feature. They also give you a different amount of Free Spins. I found the best way to judge their effectiveness is to see how many free spins they let you play with. The Incremental Wilds had the best payout, but you also get only 6 free spins. Meanwhile, the Starting Wild helped me the least but gives you 10 free spins to even it out.

As you can probably tell it has a heavy emphasis on Wilds. These can appear randomly while playing but the Golden Monkey also appears occasionally to add the special wilds to the game. The Free Spins mode revolves around these special wilds.

I thought it worked well together and the frequent Golden Monkey appearances made the base game interesting. The Free Spins mode was very rare, unfortunately!

During my time playing it again for this review, I also didn’t agree with the listed Medium Volatility. Now I obviously understand this is a game with RNG and it would probably even out over the long run, but during my time playing I had very low returns. If I had to guess, I’d say it’s because of the game’s high reliance on Wilds.

Get the right Wilds at the right time and since these can turn into Sticky Wilds this can start a long streak of wins. If that doesn’t happen, like when I tried the slot, it leaves me gasping for any kind of win. There is the option to choose a bet between £0.25 and £125 to lessen the blow if it isn’t going your way for a while. Meanwhile the potential max. win of 20,000x your bet is enticing enough to keep trying.

Even the Treasure Chest was a bit meagre, often only awarding me 80 coins out of a potential 1,000. Finally triggering the Free Spins mode offered little reprieve since these also were highly dependent on the Wild mechanics working out in favour of the player.

All in all, the game is not bad but there are better ones out there. Both games released by Yggdrasil and released in 2016. If you want to see if the Wilds favour you more then, by all means, give it a shot!

Play Legend of the Golden Monkey for free

Browse casinos with Legend of the Golden Monkey and other slots from Yggdrasil. Create an account and try the game for free before making a deposit.

You can play Legend of the Golden Monkey in English, Finnish, Swedish, German and 18 other languages. 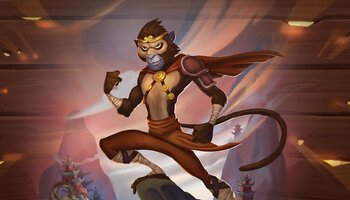