Legends of Ra takes place in ancient Egypt, following a tiny mummy as they guide us through the ruins of this great civilization. With free spins, Wilds and Stacked Wilds this might hold some surprising treasures.

The game was developed and released by Evoplay Entertainment in 2014, using the familiar and often used setting of ancient Egypt as a backdrop for the gameplay. The creators did a great job at making the game fit the setting as everything is steeped in Egyptian symbolism except the card letter symbols.

We find ourselves looking at the side of a giant temple that shows the 5-reel, 3-row playing field which holds only 9 paylines. The surrounding gives us a good idea of where we are, considering the desert sand, the palm trees and the pyramids in the distance. An extra addition is the mummy that sometimes pops up as we spin the reels, although he offers little interaction.

The sound design is good with an expected Egyptian theme. I thought it sounded good, and original enough not to feel like a copy-paste of some other slot or movie. The reels spin with the sound of falling coins which got a little annoying after a while. The mummy didn’t really make any sounds as far as I could tell.

Legends of Ra has the usual divide of high- and low-paying symbols that you’ll find in most video slots. The high-paying symbols are original and designed to fit the setting while the low-paying ones are unfortunately just card letters. The designers did put some effort into getting them to fit the theme but the letters themselves just stand out. I think perhaps card suits might have done a better job at meshing with the other symbols.

Even though the game has quite high payouts for larger paylines, a large number of symbols and a low amount of paylines, Legends of Ra still only has a Low Volatility. In my experience, this was correct as I got a steady supply of small wins. The downside was that these normally wouldn’t really compensate my spins which means a steady decline in my total funds. The max. win of 1,172x your bet isn’t quite enough in my opinion to compensate for that.

Legends of Ra keeps it relatively simple when it comes to the features, although it does have a few. The features won’t be anything original to those familiar with video slots but they vary up the gameplay.

The main game will take up most of your time as activating the bonus game or free spins mode isn’t exactly easy. The base game is rather bland as the only thing that really comes into play are the Wilds in the shape of the Scatter Symbols. The low volatility does mean you will get regular wins but they are often not very big. Most of the time, they would only be three-of-a-kind and regularly the lowest coin value.

Speaking of which, the game uses only coins to show your total funds and makes it harder to tell how much actual money you are spending. It’s important to keep an eye on that. On the other hand, it does make it easier to tell how many spins you have left.

Once you get the Free Spins mode to activate, the background changes and we head deep into one of the catacombs. The gameplay itself barely changes, players receive 12 free spins to play. Getting additional Scatter Symbols during this mode will grant extra free spins. Before the game starts, it will randomly select a symbol that will become Expanding.

During the Free Spins mode, this symbol will automatically expand to fill the reel it lands on. This makes it more likely to create a win. I say more likely but in my experience, the Free Spins mode was often a disappointment. There were times where I would win only a single coin. Other times the game would pan out brilliantly but this was much rarer while I played.

The Bonus Game was almost impossible to activate. While I found the Free Spins mode to trigger about every few dozen spins, it took me hundreds to only activate the Bonus Game once. Once it does, it involves spinning to fill one of three statues. Each statue grants the player a certain coin win depending on their bet value. I wouldn’t consider it a very interesting part of the game.

Legends of Ra fits nicely in the average slot category. It has decent graphics, the animations are basic but offer some movement, the music is fitting but not very original. The gameplay, the most important part of the game, is sturdy but also doesn’t bring anything new to the table.

Players that are looking for something simple but entertaining will have a nice time with this slot. The developer shows its competency at creating a slot that will appeal to most casual players. If you’re someone going for jackpots or you’re a power player in some other way it probably won’t deliver on that.

The maximum win is a bit too low to compensate for the low volatility and the bonus game was too hard to trigger. The Free Spins mode was the most volatile aspect of the game, as it could either grant the player nothing or a big win. Finally, players can pick a bet between £0.10 and £100 to make things fit their expectations a bit more.

Play Legends of Ra for free

Browse casinos with Legends of Ra and other slots from Evoplay Entertainment. Create an account and try the game for free before making a deposit.

You can play Legends of Ra in English, Chinese 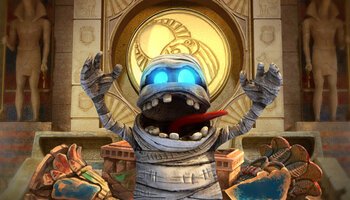