Leprechaun goes to Hell follows our brave adventurous leprechaun as he delves into the fiery pit, following the rainbow down to the end! The game comes with free spins, a bonus game and fixed jackpots.

The game takes place in hell, surrounding the leprechaun with fire and brimstone. The reel was developed by Play ‘n GO and released in 2016, making it a sequel to Leprechaun Goes Egypt and a prequel to Leprechaun’s Lucky Barrel. This game also boasts a 5-reel, 3-row playing field with an average of 25 win lines.

I thought the game looks very lively with the flames in the background constantly moving. The reels themselves are filled with all sorts of original symbols, some of which are animated. When the free spins mode is activated, we’re treated to seeing the Leprechaun digging coal into an oven while a succubus overlooks his progress.

I also liked the touch of making the music in the game hard rock, which fits the feeling and appearance of the slot. It is interspersed with Celtic flutes in the background, changed by a hard rock version of the same music when there are multiple wins. Triggering the free spins mode keeps this harder version playing the whole time. It sounded well as well as fitting the theme.

Because there is plenty of room on the screen for the playing field, the symbols are nice and large. Luckily they didn’t all use red for their colour scheme, keeping things lively as well as making sure the symbols were easily distinguishable. The low-paying symbols were simple card letters which were unfortunate, but they were given some special runes for them to stay with the theme.

When part of a win, all symbols have a slight animation. Usually, this is just a quick dash of colour running through them but the high-paying symbols shift into something else. Players can pick a bet between £0.25 and £5 per bet, which might seem low but there is a possible max. win of 250,000x your bet! Do keep in mind this is a jackpot system, where one needs to complete the bonus game in order to have a shot at it.

Leprechaun Goes To Hell has a small number of different features but they do impact the game in meaningful ways. The main parts are the bonus game and the free spins mode, but I thought the base game offers enough to keep it entertaining. It’s not simply a part that separates the special features!

During the base game, most of what can happen revolves around the Wilds. These appeared pretty often, but not so often that they were dependable. This helps land it on a Medium Volatility. It makes the base game rather uneventful but still has the potential for some bigger wins, making it a meaningful part of the game.

The real excitement comes from the two special modes, however. The Free Spins mode activates when there are 3 Scatter symbols on the screen. The player receives 10 free spins to start with but can win additional ones as they play. During the Free Spins mode, most of the gameplay is the same.

The main difference here is that any time extra free spins are triggered, a multiplier increases all wins on the remaining spins. This goes up by 2x for every re-triggering that happens. In general, I found this part of the game to be exciting but it still wasn’t where the big wins were obtainable.

Finally, there is the bonus game. Once this activates, the playing field changes to a 3-row, 3-reel playing field. On the side of the screen, we see the Leprechaun standing next to an oven. Whenever a special symbol appears, the leprechaun will shovel coals into the oven to heat it up.

Once it hits a certain temperature, it will grant you one of the four jackpots. The hotter the oven gets, the bigger the jackpot you can win! I found this bonus game to trigger more often than the free spins mode, and I would also frequently hit the lowest jackpot. Unfortunately, it is also the smallest one.

Leprechaun Goes To Hell is a fun slot that takes the classic Irish Leprechaun and brings him into a completely new surrounding. The fact it is hell seems a little inconsequential though, as little features are related to it. When it comes to the setting, it feels like the leprechaun is supposed to be in love with the Succubus Evilin but it is barely part of the game.

The game is perfect for players that enjoy a standard slot with some variation. Both the free spins mode and the bonus game are still set around a playing field and spinning reels, which keeps the gameplay easy to understand. I would consider this a great slot of players that are used to the standard slot gameplay and are looking for some slight changes to the experience.

Meanwhile, traditional slot machine fans might think it’s a departure from the standard slot gameplay. If you’re looking for something very experimental, it might not be extravagant enough for you!

Browse casinos with Leprechaun goes to Hell and other slots from Play'n GO. Create an account and try the game for free before making a deposit.

You can play Leprechaun goes to Hell in English, Finnish, Swedish, German and 30 other languages. 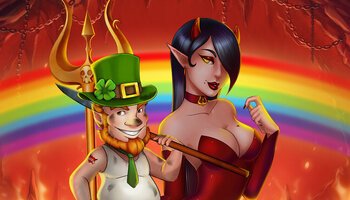