Leprechaun Hills takes inspiration from the classic Irish legend, where a little leprechaun darts across the screen to help us win. The game features free spins, re-spins and random wilds.

This slot was released in 2017 by developer Quickspin, who apparently felt a little uninspired and decided to take one of the biggest tropes in video slots as a source of inspiration. Leprechaun Hills leans heavily on all the classic elements: a lot of green, the use of lucky symbols, a leprechaun and rolling Irish hills in the background. None of it is necessarily bad but it all feels quite easy.

The leprechaun is hand-drawn but looked kind of weird to me. When there’s a big win you’ll be presented with a special screen of the leprechaun standing next to a pot of gold and whoever drew his hands needs some extra practice! The background image is lovely, showing hills, cobbled roads, old houses and a blue sky. It definitely set the mood, although most of the image was obscured behind the 5-reel, 4-row playing field with 40 betlines.

I thought the music was appropriate for the setting but sounded rather muted and in the background. The spins were quiet with only wins playing a louder jingle. When there was a special feature it would start a real Irish jig, which I thought was pretty funny. Unfortunately, it cut off abruptly when the spin stopped. Still, a good effort!

The game has a rather large set of symbols. In combination with the larger playing field and the moderate payouts for a win, this results in the game having High Volatility. During my time playing, a lot of spins wouldn’t handle a payout and I was dependent on the special features to activate any big wins. Keep that in mind as you play, as a lot of spins with higher bets between £0.24 and £80 will likely drain your account fast!

The different symbols are distinct enough to tell them apart even though most of them are rather boring to look at. The low-paying symbols are simple card letters, written in a Celtic style but without much creativity injected into them. I did like it when the Lucky Re-Spin feature activated, showing a big symbol on the screen before it exploded to fill the reels.

Leprechaun Hills is rather light on the number of features but the features it does have are pretty important for the gameplay. The different features appear in both the base game and the free spins mode.

The Wilds are pretty common during the game, sometimes even filling an entire reel although that’s not a feature but a random occurrence. A large number of different symbols make it almost required to have at least 1 wild on the payline to facilitate a win. During the free spins mode, the Wilds were about as common as they were in the base game.

I found the Free Spins mode itself to be rather lacklustre. Since there are no special features that only activate during this mode the player has no direct opportunity for bigger wins. Instead, they receive 7 free spins and must wait and see if this results in any wins. This makes it feel rather passive and unrewarding once the free spins mode activates, but luckily it does pretty often.

Finally, there is the re-spin feature. I thought this was done in a pretty unique way. Whenever there is a win with a high-paying symbol, the related symbol shows up to fill the screen, break into tiles and then plant themselves on the reels. They will re-spin with the extra symbols attached and possibly create a bigger win.

It’s in most ways a simple re-spin but at the same time, it gave the feature some extra importance by improving the odds of a win. The feature appears during both the base game and the free spins mode.

Leprechaun Hills is a pretty standard slot, both in terms of features and appearance. The use of green, the different lucky symbols and the features are not a show of creativity. That said, sometimes you can’t go wrong with being standard either. The gameplay is solid and the game looks fine. If you’re the type of player that enjoys an online slot that doesn’t do anything weird or boring you’ll find your fit here.

Players have the opportunity of getting a max. win of 1,627x your bet which I thought was rather low considering the high volatility. If you’re a high stakes player that prefer to bet big you might want to reconsider since I found this to drain my funds exceptionally fast. The wins are simply spaced out too much.

Overall, I’d say that Leprechaun Hills is the type of slot that disappears in mediocrity. It doesn’t do anything wrong but there are simply too many slots that give players what they want. Games that either offer something new or they stick closer to the standard slot experience.

Browse casinos with Leprechaun Hills and other slots from Quickspin. Create an account and try the game for free before making a deposit.

You can play Leprechaun Hills in English, Finnish, Swedish, German and 23 other languages. 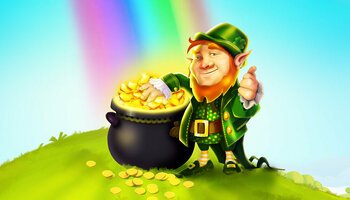