Lights is a Netent slot that took inspiration from Asian paper lanterns. An enlightening experience with sky-high wins perhaps.

This slot was originally released in 2014 and although the symbols are starting to look a little dated, the overall look of the slot still keeps up well. The rolling hills and snow-covered mountains in the background place this game firmly in Asia. We can even see a river flow by, animated and all. I thought this was a great little detail that helped set the mood.

A slot that reminded me of Lights is Dragon’s Luck by Red Tiger. Although that game is a little more bombastic it is also set in Asia and has us overlooking a suiting countryside. Meanwhile, Big Win Cat by Play ‘n Go sets the slot inside a Japanese shop if you’re interested in some more Asian imagery!

Looking at a 5-reel, 3-row playing field with 10 paylines, Lights doesn’t reinvent the wheel. It keeps things simple both in design and gameplay. I did like the idea of using paper lanterns as a source of inspiration which they incorporated into the game design pretty well.

The sound design is likewise rather simple and obvious, with a lot of mythical sounding light gongs. Wins are amplified by a short jingle but the rest of the music is muted and calm. The idea of sitting on a bench at the end of the day overlooking the Asian countryside as different lanterns pop up is a good combination.

As you can probably tell, there are quite a few symbols which makes getting a winning payline a bit harder. Luckily the Wilds show up pretty often so that helps. Light lists a Medium Volatility and I thought that fit my personal experience well. You can expect a reasonably steady supply of wins while playing.

Lights keeps things simple when it comes to its features. It has a few that can’t be surprising to even the most casual of players. They interact well with each other but don’t require much input from the player.

As you can see, it’s a short but sweet list. Free Spins and Wilds are about the staple of any slot. The only change Lights makes to the basic formula is the fact that the Wilds are random and appear on top of the symbols instead of replacing them completely. When it comes to the gameplay, I don’t think it matters at all.

The Free Spins mode has a nice background that’s different from the base game. We’re presented with a giant full moon dominating the night sky, bathing everything in a deep blue. I thought that was a nice detail for a game mode that is pretty much the same to the base game in every other way.

Netent often develops games that have a whole range of features. Games like Planet of the Apes and Finn and the Swirly Spin take that to the extreme degree with almost a dozen features each. Lights is in sharp contrast with those, with only a bare minimum of features.

Everything about this slot seems to be aimed at the goal of giving the player a nice, relaxing experience. You’ll probably play this slot for a while when you’re looking to calm down. Perhaps you’re watching something on television or you’re getting ready for bed and want to get some spins in. In that case, Lights is a great option.

The game has a max. win of 1,000x your bet which I thought was a nice compromise with its Medium Volatility. There is not much that will keep you coming back unfortunately and I’m sure I played this game when it first came out but I can’t remember it at all.

Browse casinos with Lights and other slots from NetEnt. Create an account and try the game for free before making a deposit.

You can play Lights in English, Finnish, Swedish, German and 20 other languages. 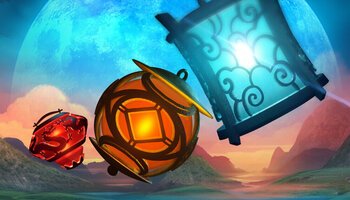