Lilith’s Inferno follows the demon Lilith as she ventures into the underworld, seeking to destroy 4 demons to allow her to progress. The player is put in her shoes as we watch her battle these enemies, using a bonus game, multiplier and free spins to get the job done.

This slot has a 5-reel, 4-row playing field with 25 bet lines, giving the symbols enough room to show themselves off as there is nothing in the background. That doesn’t mean this Yggdrasil slot that was released in 2019 doesn’t have something to look at. There are multiple times during the game where we’re treated with fully animated 3D models engaging in a variety of things.

The setting itself is never really explained except through the title itself. Lilith has been seen before in Lilith’s Passion so some players might recognize the name. Surprisingly, she looks totally different when we see her in this game. Instead of a realistic-looking red-headed woman we see a smaller girl that seems to be based on the Japanese anime style.

I found the sound design to fit the graphics in that it’s really well done but I don’t really see the connection with the setting or the theme of the slot. A game set in the underworld should probably sound a little darker or gloomier, but instead, we only hear a soft low song playing in the background during the base game. It seemed an odd choice.

The symbols in Lilith’s Inferno are beautifully designed as always with Yggdrasil slots. The low-paying symbols are simple card suits but they do look like original designs, making them fit the slot a little better. The high-paying symbols are more interesting, consisting mostly of the 4 different demons that are blocking Lilith’s path.

When these high-paying symbols are part of a win they’ll play a brief animation but unfortunately, everything gets darkened and the coin win placed over the reels so I often couldn’t really see the animations at all.

The game has a listed Medium Volatility which about fit my own experience, but I would still find my funds to go down steadily. Even with the occasional bigger wins, usually during the free spins mode, it wasn’t enough to recover the losses from trying to get there. To mitigate the risk somewhat it’s possible to choose a bet between £0.10 and £450 per spin.

Even though Lilith’s Inferno doesn’t have a lot of features, the features that are there are given a lot of room to show off. Mostly this is due to the incredible graphics that the game uses to give them their own distinct presentation. I did notice that the game sometimes crashes or gets really slow, and I had the free spin feature simply freeze, forcing me to restart my game. Something that seems to be resolved by clicking slowly when prompted to, and not just hammering on the mouse.

The base game is very simple and won’t hold any special surprises. The Wilds show up regularly enough to feel like an addition to the gameplay but they’re, more often than, not not a part of any wins.

The interesting part of the slot starts when the Free Spins mode triggers. Players receive a number of spins depending on the number of Scatter Symbols on the screen but they must try and hit a demon to unlock them.

After this, the Free Spins mode starts which is largely the same as the base game until 2 VS-Symbols appear on the screen. Then the fight mode starts. This bonus game shows Lilith facing off against one of the demons. This happens in a fully rendered 3D environment, with both characters also modelled in 3D.

This part mostly involves the player simply clicking on the enemy. The word HIT appears on different parts of their body and it seemed to suggest that clicking there would trigger a hit, while not clicking there would be a block. In my experience though, it didn’t matter at all. It seemed completely random whether or not this would result in a win.

After defeating a demon, their symbol will turn into a Wild for the rest of the Free Spins mode. You will also receive an extra 2 free spins from defeating them.

The bonus game looks really good but as I said before it was prone to crashing or freezing up, requiring me to either wait up to five minutes or even having to reboot the slot. This isn’t great if you’re doing well, of course. Another element people might not like is that it requires the player to click or tap on the screen to fight the monster, which interrupts the regular gameplay.

Lilith’s Inferno is one of the best looking slots I’ve seen in a while in regards to the 3D animations and graphics. The regular part of the slot looks great too but is not as outstanding as the bonus game. I liked the idea behind the slot but I had to research it on their official website to understand it. It’s not explained in the game at all.

Players that enjoy a game with some amazing graphics but not too much depth will probably have a good time playing this slot. The gameplay is very simple with only the bonus game requiring some extra input from the player. A max. win of 3,968x your bet is also nothing to scoff at.

If you’re looking for something that you don’t have to think about, Lilith’s Inferno is not the best choice but it isn’t overly complicated either. I found that the biggest downside was using Autoplay and having to click on the demons during the fights.

Browse casinos with Lilith's Inferno and other slots from Yggdrasil. Create an account and try the game for free before making a deposit.

You can play Lilith's Inferno in English, Finnish, Swedish, German and 16 other languages. 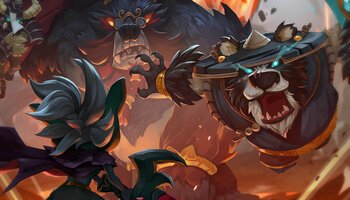