The game was developed by Red Tiger who have shown a real affinity to Asian themed slots over the years, with Lion Dance coming out in 2017. The game doesn’t really have a specific theme or setting other than the inspiration coming from the Far East. Instead, we’re treated with a lot of classical Asian images such as the famous paper animals that used to celebrate Chinese New Year.

Players will have a 5-reel, 4-row playing field to spin on, using the 20 bet lines to see if they can hit a win. The max. win is a moderate 1,076x your bet which is not as big as other slots but a nice incentive to keep playing.

You’ll find plenty of original artwork in this slot, including a background saturated in red with Chinese lion symbols framing the screen. The symbols are mostly made up out of authentic items we can find there, as well as the standard card letters. Although the creators did try to emulate calligraphy a little bit when it came to the letters, they still didn’t feel like they fit the theme.

I can’t really say much about the music that hasn’t already been said a hundred times about the music in different Asian-themed slots. There is nothing wrong with how it sounds but it also lacks any imagination or creativity and that’s just a little disappointing.

The game features a series of high- and low-paying symbols. The normal ones are static and are only lit up when they’re part of a win. The special symbols, the Wilds and Free Spins symbols are lightly animated when they’re part of something and move around a bit. Other than that, I found the base game to be pretty static.

The game has a large number of features as well as a small number of symbols, which made it odd to me that it was still listed with High Volatility. As I played it became more obvious why as the game is very reluctant in handing out wins. Even with the higher than normal payouts for a single win, they occurred too rarely to be of any benefit. As a player, you’ll be aiming for the big wins that are facilitated by the special features.

Lion Dance has some standard features like the Wilds and Free Spins, while also using the Lion Dance to add a bunch more. To make it easier I will split it into two lists.

The Lion Dance appeared randomly for me, once at the start of my session, then nothing for a long time before showing up a few times in a row. There is no way to control when it shows up or which of the 4 worlds it activates. Each world has its own feature that is always active, except during the Free Spins mode where it will activate a random feature every spin.

These ‘worlds’ have the following features:

Although the idea is nice, I found it to be rather random when the Lion Dance showed up. I would have preferred something a little more regulated, maybe that the Lion chooses a new random world every set number of spins. Instead, the player is left to the randomness of the game.

Most of the time I was stuck on the Deep Stacks world, which removed the lower-paying symbols but didn’t help much in creating wins. The volatility stayed high, even when half the symbols were removed. This is due to all the symbols coming down in stacks on this world, which actually makes it less likely to get a win.

The Free Spins mode was the hardest part of the game to get into and I only saw it trigger once during my time playing. When it does, I got to pick between 1 of 3 symbols which were hiding a random number of free spins. After this, the free spins mode started as usual.

The 4 different features that are normally divided across the 4 worlds are now activated at the same time, although only 1 can trigger per spin. This can mean the same feature appears every free spin, but it could also be an even mix between all 4 and everything in-between. Since I only activated it once I can’t tell you if it’s usually a very lucrative part of the game but in my experience, I walked away with quite some coins.

Lion Dance is a game that will be hard to distinguish from the other Asian-themed slots, not only those made by Red Tiger but those across the spectrum. The red-gold motif, the symbols and the music do nothing to make it stand out. The only really original part is the Lion, who comes on the screen animated and does add some life to the reel. I’m just afraid it’s not enough to have the slot stand out for people.

The features are a bit more original, not only in the way they operate but also how they are implemented into the game. I think it’s an original idea to have a single feature active at the same time, with the Lion to switch between them. I’m afraid a lot of players won’t like this level of randomness though, since it could mean they don’t get to play with their favourite feature the entire session.

Players that enjoy a lot of moving parts, as well as high volatility, might do well to try it out. Still, I would advise you to pick a lower bet between £0.10 and £100 per spin to see if the activated world is good for you.

Browse casinos with Lion Dance and other slots from Red Tiger. Create an account and try the game for free before making a deposit.

You can play Lion Dance in English, Finnish, Swedish, German and 18 other languages. 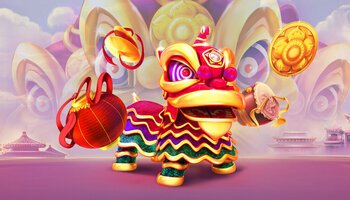