Loco The Monkey brings the titular monkey to the forefront as he shows us life in the jungle, mostly consisting of eating bananas, dealing with more monkeys and generally having a good time. For players, this means Free Spins, Sticky Re-Spins and Sticky Wilds!

One of the newest slots by Quickspin, seeing a release in 2021, the game gives players a 5-reel, 4-row playing field to play on, filled with a variety of standard and original symbols. The background shows us an animated background placing us in the thick jungle, with an overturned jeep on one side. This implies we’re the ones that ventured into the jungle and were in the jungle at the time, and we are watching how Loco The Monkey does his thing.

The symbols in the game are drawn quite well but most of them are card letters drawn in the simplest way. When there’s a win on one of the 50 paylines the tiles involved light up, and some of the high-paying symbols have some special animations but mostly the game is rather static.

I don’t really know what I expected from this slot in terms of sound, but I can say I was pleasantly surprised. The game has a rather mellow sounding tropical song playing in the background. Wins are amplified with a short pan flute melody that fits the song, and we can hear Loco make a small sound every time he appears. Overall, the sound-design felt like a real addition to the game.

Loco The Monkey comes with High Volatility due to the large number of symbols that don’t pay out a lot. The game depends on the special features to generate big enough wins to make back the coins spent on spinning the reels. In my experience, I ended up with more than I started off with but it can obviously be different for you.

Considering the high volatility, I’d advise people to make use of the possibility to pick a bet between £0.20 and £100 per spin and start off with lower bets before increasing them. The game has a certain rate of wins that you need to get a grasp on or else you might run out of funds before you hit one of the bigger wins.

Loco The Monkey comes with a number of features that make it more likely to get big wins, but they’re all pretty rare so getting them to activate and help you out isn’t guaranteed.

The features that are included are:

Most of the time, the slot takes place in the base game. Activating the Free Spins mode is not very common but if you manage to do it, you are likely to get a nice win out of it. In my experience, my funds tended to keep going up for quite a while. I did use a smaller bet though, so I was able to play for a long time which helped with the volatility.

The base game mostly revolves around the Wilds, with special attention to the re-spin function when you get 4 or more Wilds on the screen. This didn’t happen very often either, but it would automatically trigger the re-spin function. All Wilds become sticky and re-spins keep happening as long as additional wilds are added to the screen.

It was usually a pretty good source of some wins but there were a few times where Wilds kept getting added to the screen, resulting in bigger and bigger wins. Of course, this is also due to the volatility and why it is important to keep an eye on the screen.

The Free Spins function differently, also making the Wilds Sticky but adding a multiplier if a Wild lands on an existing Wild. This can only go up to 3x your bet, but of course, this is per Wild on the screen which means it can get pretty high overall.

Loco The Monkey is a slot that gives players some excellent graphics to look at as well as listen to a nice suitable soundtrack, while the gameplay stays simple enough to be enjoyable but different enough to feel refreshing.

The game will probably not turn many heads with its presentation though as the jungle theme is extremely popular. That said, the way Loco was personalised did help in setting it apart, giving it a bit more of a character than most other games bother with. If you don’t mind a silly, cartoony setting you will probably enjoy the slot.

A final mention is reserved for the jackpot, with a max. win of 6,829x your bet. I never felt like I was close to winning it while I was playing, but it was interesting enough to keep me going. The overall rate at which I won was good enough to keep me in the positives, but this is obviously no guarantee.

Play Loco the Monkey for free

Browse casinos with Loco the Monkey and other slots from Quickspin. Create an account and try the game for free before making a deposit.

You can play Loco the Monkey in English, Finnish, Swedish, German and 24 other languages. 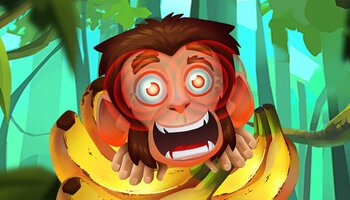