Captain Hook has a ship full of treasures for you to plunder. Join Peter Pan and the Lost Boys on a new adventure.

iSoftBet went all-in in 2020 with the classics. This time though, it’s not about classic slots, it’s about classic cartoons. Lost Boys Loot is a game about Peter Pan and the Lost Boys trying to steal Captain Hook’s treasures.

This is a theme-heavy slot with a good emphasis on the story. Every feature is actually related to the characters and events. This is one of the key aspects of Lost Boys Loot. Everything feels right and all the pieces fit.

The slot is full of different special features and you will have a lot to experience. Surprisingly though, this slot has only medium volatility, unlike many other games like this. You actually get to see all the features and the game isn’t over quickly.

This is a beautiful slot that takes inspiration from the old cartoons. Sure, the characters are from J.M. Barrie’s book, but the visual style is clearly pulled from Disney’s Peter Pan. The slot has that colourful cartoonish style, but it’s just different enough that Disney’s lawyers can’t touch it.

I love what iSoftBet did with the visuals. The game has a lot of character and every symbol is a part of the story. Everything has a reason to be there and every feature is thought out. For example, symbols aren’t just locked in place in one of the features, but rather they are captured by Captain Hook.

The same attention has been put in all the sounds. The music is energetic and adventurous, and the sound effects are perfect as they are. Nothing seems to be missing and everything makes a correct noise.

Normally, I would say that a game like this and its characters are interesting enough to take out of the slot and use in a proper story somewhere else. This time that isn’t necessary. What we see here is basically already done in some animated film and this slot is of the same quality.

All your favourite characters from the novels and films are here. Captain Hook, Peter Pan, Tinker Bell, the Lost Boys and even Tick-Tock are all part of the game.

There is one thing I have to point out that I love here. Even though the low-tier symbols are card suits, they are done in a way that actually fits the theme. They are all jewels that the Lost Boys and Peter are after. And as for the high-tier ones, we have the Lost Boys, a treasure map and that demonic ticking clock.

Hook and Tinker Bell are both wilds with a bit different properties. Captain Hook is often seen and even has a full-reel-sized version rolling around. Tink on the other hand only shows up rarely, but always in multiples.

Peter Pan is the bonus symbol, or technically the scatter symbol. He will activate the Duelling Free Spins feature if you get at least three of them anywhere on the reels.

A quick look at the paytable tells you that this slot favours long combinations. Three-of-a-kind of anything is not really worth much and basically just gives your bet back, if that. Fortunately, there are a lot of wilds, and especially tall wilds, in the special features that make this a bit easier.

Basically, the slot will keep handing out small wins until you hit one of the multiple special features. They are where the bigger wins are and what you should be aiming for. The game has medium volatility, so you have plenty of time to activate them.

The fierce crocodile is still after Captain Hook. At the start of any spin, the crocodile can swim up to the ship. If any Hook symbols show up on the reels, the crocodile will jump and bite him. This turns all symbols below the wild into wilds as well.

Tinker Bell can swoop in at the beginning of any round and bring with her some fairy magic. She will turn 3-5 symbols into wilds.

If a treasure chest shows up on any of the reels, you get to go treasure hunting with the Lost Boys. Open three treasure chests and see what you find inside. You can get cash prizes or even access one of the Free Spin features.

Peter Pan is challenging Captain Hook and they are duelling it out on the deck. Land those Peter Pan bonus symbols and you get free spins. Three symbols are worth 10 spins, four are 20 and five land you 30 free spins.

If both Peter Pan and Captain Hook show up on the reels at the same time, they fight it out. If Hook wins, you get a bigger multiplier for the spins and if Peter Pan wins, you get more spins.

Captain Hook is setting up his traps to capture the Lost Boys. If a full-sized Captain Hook wild shows up on reel three, you activate the Hook’s Treasure Trap feature. Just spin the ship’s wheel to see how many free spins you get.

The wild Hook is now stuck on reel three for the remainder of the spins. If you get a winning combination, Hook will drop a net over those symbols and you get to re-spin for more of the same. A spin will continue until you don’t get any more of the winning symbols.

This slot is an experience. There is a lot to see here with the great theme and all the features. This is a game for those of you who want a spectacle and not just a slot.

I simply adore this game. There aren’t many games that let me visit my childhood like this and get all nostalgic about the cartoons I watched. Sure, slots are never for children, but this one is for the child inside you.

There is one thing I’m a bit conflicted about. I can’t make up my mind about the volatility. As it is, the game lets you play for a long time and see all the special features, but it is hard to hit those big wins. If the game had higher volatility, there would be more excitement, but you’d probably miss out on some of the cool features.

Nonetheless, this is a game I will be playing more. This game has a lot to offer and I enjoy every bit of it.

Browse casinos with Lost Boys Loot and other slots from iSoftbet. Create an account and try the game for free before making a deposit.

You can play Lost Boys Loot in English, Finnish, Swedish, German and 22 other languages. 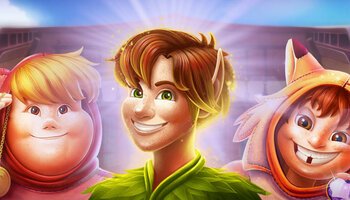