Lotus Love is an online slot that may provoke nominal interest in the soap opera aficionados out there, given there are any among slot players. If there aren't, then the only reason why anyone would play this game is the 7500x max payout, the high RTP of 97.04% and the 50 paylines.

I will admit that the thing that drew me to play Lotus Love was the symbol with Mao Zedong banknotes. Everything else about it is quite bizarre to me because it's about two newlyweds and their dream wedding. I just find the theme not conducive to having fun on an online slot.

On the other hand, it looks like the game was specially made for the land casinos on Macau. How it had become adapted as an online slot beats me, but I still think it is a decent online slot.

The symbols that tell the story about this particular love between two embodiments of the tender lotus flower are the newlyweds themselves, a couple of red envelopes stuffed with Mao banknotes, a bouquet of flowers and a four-story wedding cake.

Each of these symbols has been cast as a thing in motion. The banknotes are counted in a flaunty way (I told you it was the symbol that got me), the bouquet is about to get thrown into the thicket of bridesmaids and the cake - believe it or not - literally separates as if knocked down by accident.

Yeah, it's a ball this Lotus Love slot, but don't mind the graphics and the jazzy string instrument melody because you can play the game on mute and enjoy some of the potential surprises that this particular math model can dole out on any spin.

Booming Games has furnished Lotus Love with a unique set of extra features, which I found to be an interesting departure from the usual wild and free spins bonus.

There isn't much to add regarding the extra features, except that you can get the two-way-pay feature to trigger during the free spins, which is definitely a boon to the payout potential. I didn't get the two feature to trigger together so I don't know what I was missing, but I think the potential is obvious considering the sheer number of maximum paylines.

I noticed that the game enables you to choose the number of active paylines. The maximum is 50 and covers the reel set thoroughly and enables the medium volatility to reflect as it naturally should. I was able to get regular winning outcomes, however, I can't really say that I was happy with the actual payouts.

There are four cards symbols and two Chinese characters that can pay between 0.10x and 0.60x for three of a kind. Only one of these symbols can exceed the amount of the bet in return for your stake, while the rest can only pay between 0.2x and 0.7x for four matching symbols.

I found out soon enough that the only way for these values to reflect in the positive is to get them to trigger during the two-way-pay phase. This is where Lotus Love can dish out multiple payline wins that amounted to more than what I had staked.

The newlyweds' symbols and the wild are not shy about landing on the reel set in combinations of three and four matching symbols. I only got a five symbol win for the bride, which paid a decent 25x my bet.

All of the specifications sit right with me. The RTP is quite high and it reflects quite nicely with the medium volatility. I think the game is decent enough to give it a chance, but I couldn't stand this ceremonial procession for too long, so I just left the wedding without trying the cake, if that makes any sense.

Browse casinos with Lotus Love and other slots from Booming Games. Create an account and try the game for free before making a deposit.

You can play Lotus Love in English, Finnish, Swedish, German and 23 other languages. 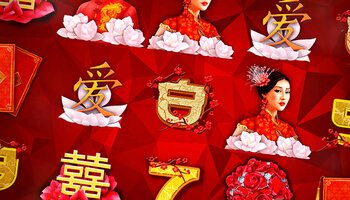