Luchadora is a game that draws inspiration from the Mexican wrestlers called Luchadores. The slot doesn’t only feature a number of these performers but also includes random wilds, free spins and multipliers.

Originally created and released by Thunderkick in 2017, Luchadora seeks to bring to life a pretty important part of Mexican culture. Just like how Americans enjoy wrestling, their southern neighbours also embraced this type of entertainment. Now it’s brought to life on a 5-reel, 4-row playing field with a standard 30 paylines and a number of special features.

As far as the presentation goes I thought this game does a good job at sticking close to the art style and type of costumes I would associate with Mexican wrestling. The characters in the slot all play a prominent role as well as having their own distinct personality and masks. There are even some animations whenever they are part of a win or turned into a random wild to keep the board seem more alive.

The music also plays a big part in the immersion, with an authentic-sounding Mariachi band playing in the background. Whenever a special character is activated or the game triggers a win we’ll hear an announcer talk in Spanish. All of these elements really added to the total experience and made it feel like I was participating in an actual match.

The game is listed as Medium Volatility which somewhat fits my experience. There will be times where wins are hard to come by but when they do appear they aren’t likely to be very high either. The bigger wins will likely be attained during the free spins mode which is triggered pretty easily but don’t expect it to be common. Over time I managed to stay pretty close to my starting funds.

Players can select a bet between £0.10 and £100 per spin which should help deal with the volatility. Power players can increase the size of their bets to profit off bigger wins while those that aren’t as comfortable playing on the edge can pick a more moderate bet to prolong the use of their funds. Either way has its own up- and downsides.

The symbols in the game are ranked as such:

Luchadora tries something new with its features which do make it a bit complicated to explain. There are a lot of features that interact with each other in some ways that won’t be immediately obvious to most players.

Overall, the gameplay is quite nice but I never felt very engaged by it. The feature that turns different Luchadores into Wilds is a good idea but I didn’t get the impression it was being useful very often. There are times when the symbols are simply turned into Wilds randomly which often was more helpful than the corner tiles.

Luchadora is a nice-looking slot with a strong sense of theme and setting. All the details are there, with some fun and colourful graphics to bring that to the player. The music also plays a big part in the immersion and helped a lot in setting the mood.

The features were okay but I never really felt like they offered anything special to the game. If anything, it felt rather unnecessarily complicated for what amounted to a very small impact on the gameplay.

Players that are looking for big payouts will likely not find it here. The game offers a max. win of 1,995x your bet which is below average when compared to other slots with medium volatility. That said, people that are interested in the setting will likely have a good enough time playing this slot.

Browse casinos with Luchadora and other slots from Thunderkick. Create an account and try the game for free before making a deposit.

You can play Luchadora in English, Finnish, Swedish, Norwegian 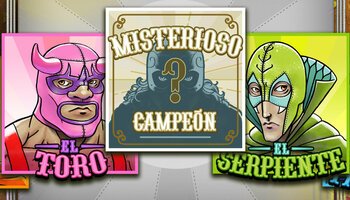