Lucky Angler: A Snowy Catch puts us in the snow-covered boots of an ice fisher as they head to the frozen lakes to see if they can fish up some wins.

The idea of a slot based around the sea and fish is of course nothing new, but I think Lucky Angler: A Snowy Catch was the first one to trade in tropical seas with frozen lakes! The game was originally released in 2012 by NetEnt and has stayed relevant ever since then by being a solid slot with enough features to keep it interesting.

Although the game is getting up there in years, the graphics still look good to me. The art is sharp and it has enough small animations everywhere to keep it interesting. We’re given a side view of the frozen lake, with fish in the background swimming past. The symbols themselves are largely static except for the Wild and Scatter symbols.

The designers went for a cartoony style with this slot, giving the fishes, lobster and even old shoe expressive faces. It reminded me a lot of other NetEnt slot Flowers which has a similar art style and the same type of faces.

The soundtrack has little music but is mostly filled with sound effects, from bubbling to the cracking of ice. I thought those were nice little touches and they amplify the idea of sitting alone on the ice, fishing away.

The slot is comprised of a 5-reel, 3-row playing field with a total of 15 paylines but they pay both ways to essentially double them. This gives plenty of room for the different fishes to show off and the game keeps an open look.

The symbols in the game are related to the theme, although the lower-paying symbols are simple cards. The designers did carve them out of ice to keep them somewhat in the same style.

I liked the small details in the animated symbols, although it was a shame they didn’t do it for all the symbols.

Lucky Angler: A Snowy Catch has a modest number of features but they do enough to spice up the basic gameplay to keep it interesting. It’s listed Medium Volatility was pretty close to my experience. The max. win is 2,000x your bet so you’ll have a shot at winning that.

I liked that the game has paylines from both sides, essentially doubling the opportunity to get a winning payline. I found that this worked particularly well in combination with the Sticky Wilds. I had times where Wilds would stick for almost a dozen spins because they would either be part of a left-to-right payline or one going the other way.

The Scatter Symbols showed up pretty regularly and they would trigger the Free Spins mode fairly often as well. This mode didn’t really strike me as being particularly lucrative compared to the base game, but a few free spins are always nice! The fact that the Wilds are all Sticky the entire time does help a lot in getting winning paylines.

Lucky Angler: A Snowy Catch is one of the slots that I first played when I got started with slots. The basic appeal of the game and its attention to detail has cemented my opinion of NetEnt in many ways. They almost always bring a lot of creativity into their slot designs and even with a relatively basic slot like this, they give it a personality.

I was surprised to see how well it has aged. The graphics are arguably better than some of the newer slots made by other developers and the animations keep everything look active and engaging.

The soundtrack was a nice touch. It wasn’t as much music as I’m used to but it focused more on setting the mood.

With the ability to choose a bet between £0.30 and £150 I think it offers players enough flexibility to pick a bet amount they’re comfortable with. The max. win isn’t the biggest I’ve ever seen but still very respectable.

Overall, it’s a simple but solid slot that’ll give players who are looking for that type of experience exactly what they’re looking for.

Browse casinos with Lucky Angler: A Snowy Catch and other slots from NetEnt. Create an account and try the game for free before making a deposit.

You can play Lucky Angler: A Snowy Catch in English, Finnish, Swedish, German and 20 other languages. 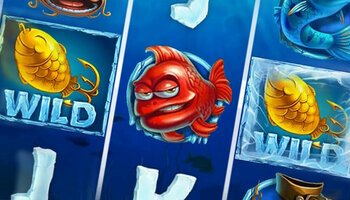