Back in the day when Play'n GO cut their algorithmic teen on simple games, Lucky Diamonds was a slot that made sense.

Seen from this distance in time, a three-reeler that has a single payline is a tough sale for the average player, however, there are people who can recognize something of value in these games and I am certain that it isn't because of the graphic design.

Lucky Diamonds has a simple mission that it can deliver by simple means - place three matching symbols on the payline in the middle and call it a winning outcome. One of the big positives about classical slot machines like this one is that any of the winning outcomes pay more than the wager.

Another detail is that few of the different symbols can pay for a combination between them, so a payline dotted by the same symbol is not the only way to land a winning outcome.

Looking for yet another distinguishing detail on Lucky Diamonds is the sheer number of symbols. When I say the game is simple, I mean it is exceptionally simple and there is intrinsic value in that. For example, the three reels can fit any number of symbols, but Play'n GO has opted for no more than six different ones.

And last, but not least, it is impossible to overlook one detail that hides in plain sight. The game is not too cheap but also not too expensive to play in view of the payouts it can generate. 2500x your bet is the top prize that can crop up from any spin and the cost of the ticket that may fly you there is £1.50 per spin.

For those who haven't heard the words Liberty Bell slot in the same sentence, here is a little casino trivia. It is supposed that this is the first-ever slot machine, made in 1894. Now that's amazing.

So if you wonder what would be the online slot that is equivalent to the Liberty Bell, this is it. I am half-jesting, of course, as there are too many one-paying slots out there and many look similar, but what I am not jesting about is the fact that the original slot machine actually looked pretty amazing.

At any rate, Lucky Diamonds has all of the elements on the same screen. The reels are in the center, below are the controls for Coin Value and Coins and the spin and autoplay buttons are in the bottom-right area.

Also you don't need to look for the paytable button, because the payout structure is right there on the screen to keep you company and remind you that this old school game means business.

Sad to say, there aren't any. No free spins, no respins, absent is the ability in some slots to hold one or two reels for the paid respin.

Seen through the complex prisms of these diamond wilds, Lucky Diamonds is actually a quite interesting game, pay-wise.

The range of bets starts at 50p and ends at £15.00 per spin. Any of the amounts within that range are formed when you select the Coin Value and the number of times that value is going to be multiplied, which is once, twice or three times.

Lucky Diamond makes figuring out the payouts an easy task. If you play one coin, the amount of your winning combination is any of the symbol values in the first column multiplied by the Coin Value.

Trying out the payout mechanic doesn't come cheap, but a 50p per spin can win you 10x your bet for the single BAR symbol, 25x for the double and 40x for the triple BARs.

Landing a single cherry on the payline with any other two symbols pays 2x, 4x and 6x if you bet the stake one, two or three times. This is where the paytable starts and it seems like quite a fair deal to me.

The second most valuable symbol, albeit quite far behind the diamond wilds, is the red seven. Wagering the smallest bet can win you 80x while playing two or three coins bumps up the winnings to 160x and 240x your bet.

The low grades that I gave below are just because of the graphics, but this game is really not concerned about any of that. Looking beyond the visual crudity of Lucky Diamonds you will find a game with a decent RTP (95.94%) and medium variance.

I think these credentials make it possible for winning outcomes to crop up across the range of payouts. Landing three diamonds can amount to a jackpot prize, especially if betting three times the stake, but this ought to be a very rare event.

On the other hand, I caught myself giving this game more spins than I ever anticipated, because of the wild multipliers. I didn’t get a 4x multiplier on account of two wilds in tow with any other symbol, but I did get few wilds plus two symbols for a double on the win and it felt quite good.

Browse casinos with Lucky Diamonds and other slots from Play'n GO. Create an account and try the game for free before making a deposit.

You can play Lucky Diamonds in English, Finnish, Swedish, German and 30 other languages. 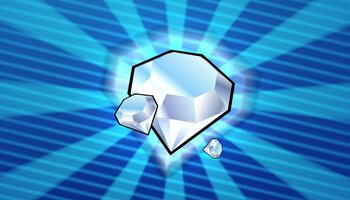