Lucky Easter is set during the springtime when the flowers start to blossom and a very animated bunny hops across the screen to add Wilds, Free Spins and Colossal Symbols.

The slot was developed by Red Tiger as they move away from their usual Asian inspired games and instead they go for something a little more Western. The game was released in 2017 and still has amazing graphics and a lot of animations. The Easter Bunny plays a big role in this game, showing up to add different features to the screen.

There was also a lot of time put into the creation of the different high-paying symbols as they’re all detailed and original. They mostly make up items you would consider a part of Easter or are tangibly related to bunnies and chickens. The low-paying symbols are just card letters, although made to slightly resemble painted Easter eggs. The 5-reel, 3-row playing field covers 20 bet lines, with a transparent view of the garden behind them.

The music was fine, a cheery song that reminded me of the spring played in the background. Simple jingles would play when there was a win and only during the activation of any of the features did the music change. Here I’d hear children cheering as well as the tempo increasing. I also liked the different sound-effects added to the game, going from bouncing sounds when a Free Spins symbol appeared to the eggs with Free Spins bouncing.

The game has a wide selection of symbols, which helped in establishing the High Volatility. Lucky Easter depends on the different features to activate in order for a player to get a big win. During my time playing the base game, wins were not uncommon but were almost never big enough to really be worth the time. This is really a game where the base game is something you use to get from feature to feature, and not important on its own.

If we look at the symbols, we’ll find:

Lucky Easter plays pretty quickly, not interrupted very often by wins or features. Putting on Autoplay will get you through a 100 spins in only a few minutes. Be aware of that when you want to use this mechanic. There’s the option to pick a bet between £0.10 and £100 which lets you control this somewhat.

I found this slot to be rather packed with features, but most of them are spread out across the base game. Only during the free spins mode do the features appear every spin, although never more than 1 at a time.

Even though the base game feels pretty inconsequential when it comes to any big wins, the features can be added to the game at any moment. This makes it a little more bearable to play since it keeps it interesting to see when the next feature triggers. Whenever one of these features are activated we’ll see the Easter Bunny’s ears pop up behind a fence before he jumps across the screen.

The features aren’t especially original but they work well enough in facilitating wins. The Colossal Wild was rare and it usually placed itself on reels 3, 4 and 5 but it still helped to get a series of wins. The Random Wilds are nicely animated as we see a number of chicks carrying Wilds across the screen, dropping them before they randomly pop up across the playing field. Since they’re Wilds, they are always good to have.

The Random Symbols work the same way, this time having the chicks fly past and replacing the low-paying card letters with the high-paying symbols. This was less likely to trigger wins but wins would be higher as a result.

The bonus game is triggered by getting 3 Easter Egg Bonus symbols on the screen. Once that happens, we’re presented with a winding path through the garden leading to a red velvet pillow. Along the route, the path is divided into pieces, each of them with a different multiplier. Players get to pick between 6 Easter Bunnies hiding in the grass.

Picking one will show how many steps you’ll take down the path. This can also include the Collect statement, which ends the bonus game and rewards you the multiplier to land on. The path is divided into higher and lower multipliers instead of slowly ramping up, meaning that you don’t need to get very far to get a big payout. That said, the biggest win is still at the end of the path!

The Free Spins mode is very similar to the base game. The main difference is that the special features appeared randomly every spin, making any wins during the mode either more likely or bigger. I enjoyed the Free Spins mode, especially when I managed to re-trigger and add additional free spins.

Lucky Easter is a fun, colourful and animated slot with a lot of different features. Players are kept interested in what is happening by having the different features trigger randomly during the base game, but it is the bonus game and free spins mode that makes the game really interesting.

The game has a max. win of 800x your bet which is obtained by reaching the end of the bonus game. It might not look like a lot but it’s balanced out by the more regular big wins during the rest of the game. Even the base game is likely to reward you coin wins that make up a number of spins.

Players that enjoy classic fruit machines won’t be very happy with what Lucky Easter offers, but I think there’s something here for everybody else. The game isn’t too difficult for casual players but offers enough features to keep things interesting for more advanced players, while the graphics and animations are perfect for modern slot enthusiasts.

Browse casinos with Lucky Easter and other slots from Red Tiger. Create an account and try the game for free before making a deposit.

You can play Lucky Easter in English, Finnish, Swedish, German and 18 other languages. 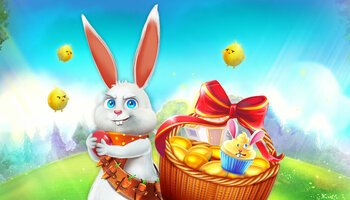