Lucky Fortune Cat takes the authentic idea of the lucky fortune cat in Asian culture as a basis for a fun, engaging slot with some interesting features!

Red Tiger developed and released this slot in 2016 with a standard 5-reel, 3-row playing field and 20 paylines. While that might not turn anyone’s head, the design of this slot was really impressive and helped it stand out. The graphics are made to look like all the symbols are drawn with brushes, artistic renditions of the different objects they represent.

The background shows wide-open scenery filled with different buildings overlooking a massive gorge, with the reels laid over them. There are unfortunately no animations in the background and the symbols themselves are also rather static but the amazing art-style helped a lot to even this out.

There is a lot to see in Lucky Fortune Cat, with all the symbols drawn in this rather unique style. The artists showed a lot of talent at even giving the low-paying symbols some character, looking like they’re quickly drawn with a paintbrush. That said, there are some other slots that use the concept such as Big Win Cat by Play ‘n GO.

When it comes to the music the slot isn’t as creative, sticking close to the Asian music style that anyone would expect. That’s not to say it sounds bad because it does sound interesting and light, fitting with the artistic style.

The symbols in Lucky Fortune Cat are made up of the usual high- and low-paying divide. The high-paying symbols look great with a lot of colours and a distinct special style. Meanwhile, the low-paying symbols are standard card symbols but they luckily also fit the appearance of the game.

When the Lucky Fortune Cat symbol shows up there is a short animation of the cat ‘coming to life’ before settling back into the reels. You’ll also hear a quick meow as it does. There aren’t too many symbols in the slot which helped with the Low Volatility.

Lucky Fortune Cat doesn’t go overboard when it comes to different features, but it does keep things interesting with the features it does include. Players that enjoy a rather classic experience but don’t mind some original features will probably like what Red Tiger has done with this slot!

Most of the features revolve around the Lucky Fortune Cat, which is a stand-out symbol in the game, depicted as a porcelain cat that can be found in many Japanese shops. The Cat is funny and cute, showing up occasionally.

When it does, it will activate a special feature. The more of them appear at the same time the bigger the bonus. There are 3 features that are associated with this symbol, with the Re-Spin feature being the most common. I found that one also to be the least impactful but that’s probably why it shows up the most often!

Random Wilds and multipliers can really create some big wins, but they were few and far between during my time playing. It was more common for the features to create smaller wins.

I found the features to be pretty nice but unfortunately they’re gated by the Lucky Fortune Cat. During the regular time playing, you’ll only be confronted with the regular Wilds. If you’re looking for something a little more chaotic and random it’s probably not exactly what you’re looking for.

Lucky Fortune Cat is a pretty if static slot. The design of the game is very much on point with artistic symbols that are striking and original. The low-paying symbols also look painted even though they aren’t nearly as special. The music was not nearly as interesting but still good enough for the purpose of livening up the game somewhat.

Players have the opportunity to pick a bet between £0.10 and £100 per spin, while the max. win is 807x your bet. That’s not very high but taking into accounts its low volatility it does make sense. That said, there were only a few times during my time playing where I felt like I was actually winning something and not just compensating for my losses.

If you like a classic slot with amazing graphics and some basic features that are largely hidden then you’ll like Lucky Fortune Cat. If you prefer slots with lots of features that are on the foreground most of the time, it won’t deliver that.

Browse casinos with Lucky Fortune Cat and other slots from Red Tiger. Create an account and try the game for free before making a deposit.

You can play Lucky Fortune Cat in English, Finnish, Swedish, German and 18 other languages. 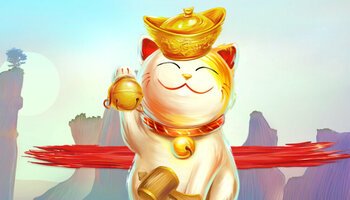