Lucky Fridays is all about that office life where you work all week but you’re really just worrying about the after-hour party on Friday. Players can now enjoy this idea while spinning the reels in this slot with multipliers, colossal symbols and a bonus game.

This 5-reel, 4-row playing field slot was developed by Red Tiger and released in 2020. What immediately jumps up at you as you start up the game is the dedication to the setting and the presentation. The entire game actually feels like it’s based around working at an office and a party on Friday. This ranged from the different symbols which are all done to fit the theme, as well as the way the features work.

We immediately can see we are at our desk in an office building, with the reels projected onto a monitor and various items surrounding it on your desk. There is a clock at the bottom of the screen that counts the hours, triggering a special mode when you reach Friday afternoon. There are 30 paylines to win on which is a little above average, and getting a win will show the winning bet line as well as the total coin win.

I wish there had been a little more attention put into the sound design though. During the base game, there isn’t really a song playing in the background and the effects you hear are standard. I would have expected to hear things like typing or the general murmuring of a busy office, just to appeal to the theme. Once it’s Friday and the party starts, you do hear people cheering and there is dance music that plays, helping with the difference in tone.

Lucky Fridays is committed to its setting and as a result, all the symbols in the game are originally created for this slot. The high-paying symbols are different archetype people you would find in the office, from a secretary to a CEO. The low-paying symbols are generic items you would associate with a rich business person such as sunglasses, wallets and Rolex watches.

All of these symbols are slightly animated as they come down the reels but they don’t really do anything when they're part of a win. Normally I’d call that a missed opportunity but considering the amount of work that was already put into the presentation I think it’d be a bit too much to ask. All of the symbols are distinct and fit the setting well, not using any weird colours.

Players will have to contend with High Volatility as the slot does not award normal wins very highly. There are also quite a few different symbols in the game which make it harder to get enough of them on a win line. Players can set a bet between £0.10 and £20 per spin to help deal with this volatility. As a reward, they can have a max. win of 3,500x your bet to look forward to but this is actually a bit below the average for a slot with this difficulty.

When it comes to the symbols, you’ll encounter the following:

Lucky Fridays doesn’t do much during the base game, with only the Wilds being the interesting feature at this time. The Wild does appear quite frequently but is only of limited use. Most features won’t activate until the Friday party.

The game counts the hours of the workweek at the bottom of the screen, where every spin counts as 1 hour. Every day lasts from 08:00 to 18:00. On Friday, the Party is triggered at 18:00 and lasts for 6 spins or until 00:00. During this time, the high-paying symbols are worth more.

When the party is happening, there are different features activated. These aren’t going to appear every spin but they do trigger regularly. The Colossal Symbol is big but has to appear on reel 2 to have a shot at helping create bigger wins more than normal symbols. Wilds can appear stacked but this is not something that happens often.

There is no way to skip ahead to the party, and you will have to spin 5 times 10 hour days to get to the Friday Party. During the party, there is no guarantee any of the features will activate, adding to the high volatility.

Lucky Fridays is one of those slots that takes a rather mundane topic and manages to make a really interesting slot out of it. I’m not sure I love the features that are included, but the way everything is designed and implemented shows a great deal of care.

I was really enjoying the way that the game builds up to the special bonus mode, even when that party was not often a big success for my funds. In fact, I found that my funds dropped pretty steadily during my time playing. I only had a handful of big wins while I tried out this slot and it was usually during the party mode.

Considering it also has a lower than average jackpot when compared to slots with high volatility, I wouldn’t recommend this game for high rollers. If you’re a player who enjoys a nice-looking slot with a great theme and the dedication to have this setting permeate every detail of the game, I think it will be a great fit.

Browse casinos with Lucky Fridays and other slots from Red Tiger. Create an account and try the game for free before making a deposit.

You can play Lucky Fridays in English, Finnish, Swedish, German and 17 other languages. 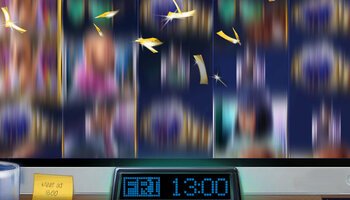