Lucky Girls is based around a group of girls that make their way into a casino and have the time of their lives. With Stacked Wilds, a bonus game and multipliers it’ll be interesting to see if we can follow suit.

This slot is relatively new, being released in 2018 by Evoplay Entertainment. The graphics are sharp and detailed with enough animations to make it look appealing. The overall style is a mix of realistic and cartoony, especially considering the characters. It seems obvious the name comes from the 3 characters in the game and the background that shows us a fancy casino with a multitude of slot machines.

The girls each have their own appearance and can appear both as Stacked Wilds on the 5-reel, 3-row playing field or on the side of the screen to add their own unique bonus. Both times we’ll see some subtle animations that make the characters come to life. Most of the other symbols are ones we’ve seen before in slot machines, including card suits, bells and 777s.

When it comes to the sound the developers went for rather obvious but nice-sounding upbeat casino music. You’ll hear the typical jazz sounds of a classic gambling hall from the 50s which did help in setting the mood. Wins are amplified with trumpet solos and there are a number of symbols that get their own effects.

The symbols in Lucky Girls are given a slight 3D perspective while being drawn with hand, which I think is always a good choice. Drawings tend to look newer and better for longer than 3D graphics. Still, the symbols are all animated when part of one of the 20 paylines. With its Low Volatility, you can also expect quite a few of these to show up during your time playing.

The special symbols are given some extra animations, including the Bonus Wheel spinning and landing on one of the fields that actually decide how many spins you will receive.

The game has low payouts for most symbols which comes from the notion that there are multiple features that can increase the likelihood of a win. The Stacked Wilds appear quite often and even the free spins mode would trigger regularly enough to feel like a part of the game. These factors made wins more likely and to compensate the payout for each is reduced.

Lucky Girls has a number of features that aren’t very original but do give the game some room to breathe. The combination of features isn’t even unique to this slot, as most Evoplay games have similar features included. Think of Naughty Girls Cabaret or Totem Island.

The features you can find here are:

Something else to point out is that the 3 girls in the slot each have their own unique feature they can add to the game. This can happen randomly during the base game, where one of them will appear on the side of the reels and grant this feature for a single spin. During the free spins mode, the player is allowed to pick 1 of them to be active for the entire mode.

While I played the base game I noticed that the girls appeared quite regularly, both as Stacked Wilds as well as granting their bonus for a single spin. Their effects aren’t always great and especially the Multiplier doesn’t help in getting a win, it only increases its total coin value when there is one. The Random Wild was probably the most useful, both during the base game and the free spins mode.

The features all point themselves out during the gameplay and I didn’t think it was necessary to dive into the paytable for that. The idea that the Bonus symbols are small wheels that grant the player a number of spins is a fun notion. Since the symbols do have a 0 on them it is technically possible to get 0 free spins even when getting 3 Scatter Symbols on the screen. On the other hand, the maximum number of free spins is 15.

Overall, I thought the free spins offered the players enough variation and incentive to keep playing but the low payouts for winning symbols made it rather hard to get more coins back then I spent. Because of this, I had a slow but steady decline in funds as I played and with only a max. win of 446x my bet it never felt like I could win it back.

Lucky Girls resembles Naughty Girls Cabaret in several ways but isn’t as risque as the older game, nor does it feature the same cartoony characters. The gameplay is very similar, however, with a number of gameplay tweaks that change the way the slot is enjoyed.

If this is something that you like remains to be seen. The stacked wilds appeared quite often, and each of them granting a respin was obviously a nice bonus. The Free Spins mode was a lot harder to activate and even when it did it was no guarantee for success.

The game will probably appeal to slot players that simply enjoy a slot with some standard features and some nice graphics without breaking the mould or doing something completely unique. I would advise everyone to start off low before increasing your bet size, which can be between £0.10 and £500 per spin.

Browse casinos with Lucky Girls and other slots from Evoplay Entertainment. Create an account and try the game for free before making a deposit.

You can play Lucky Girls in English, Chinese 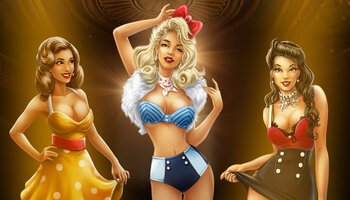