I can travel to hell and back and call it a reel adventure as long as hell plays and feels like that in the Lucky Little Devil slot. This is a Red Tiger game that comes with an unusually cartoon-like theme featuring the cutest little devil you'll ever see.

If I were ever given the liberty to conceive a hell-themed slot I'd go for the full pent-up, fear-loving imagery of a doomsday messiah: tar baths, charcoal chairs, lakes of lava and bars that serve shots that are lit on fire. Thank the almighty I am not just a slot player or this would be one repugnant game.

On the other hand, Red Tiger Gaming has made a game that presents hell in a manner which is fun and potentially rewarding to the sinners, i.e. those who'd dared pull the lever of the Lucky Little Devil slot. The game comes with a few extra features, such as surprise guaranteed wins and mystery symbols so it offers more than just a base game and a free spins bonus. That makes it salient according to my book of standards.

It is a small wonder that the most valuable symbol on the paytable bears the mark of the devil (666). If you're well-versed in the history and culture of China, that number signifies "smooth sailing" so to speak and stands for good things in general. So regardless of the way you see it, the 666 of Lucky Little Devil is prized at 1,380x your payline bet for the top combination of five of a kind and the game can arrange for a maximum win potential that can top 1481x your bet form a single spin.

Red Tiger has given the devil theme a total makeover. The critter in the lead role is a cute little imp who stands beside the reel set to cheer-on potential big wins and to come to the aid of the reel set by casting its reel-modifying features.

The game is quite playable and the graphic style is unique and can hold your attention for long thanks to numerous moving parts and visual niceties such as glossy symbols, symbol transformations, animated details and so on.

I think that this game is a Red Tiger classic because from their 2017 era because it comes with a graphics style that reflects more colour than your typical slot by the same company, which is today focused more on realism and to a good effect.

The musical theme is fast and effervescent, that is, completely in tune with the character of the game.

Fast-paced gameplay that can arrange for more than a single surprise event is made possible by five extra features in total.

A random event can happen with the help of the little devil himself. He can step into the picture and sprinkle some pumice on the reel set in order to add extra spins. Sadly, I didn't get this part of the bonus feature but seeing this game play out the way it does, I think it is quite possible for it to land on the third iteration of that bonus.

The smallest payline bet is 2p per payline which makes the smallest bet 20p. This amount is sensible enough to bet against the house when you are trying out the game but to get a real hold on the payout potential, a slightly higher bet may deem any of the extra features more valuable and potentially double or triple your win.

The symbols are prized quite decently. I said that the 666 symbols are the most valuable one son the paytable because it can ring-in an amazing 20x your bet for three symbols, 30 for four and 138x your bet for five of a kind on a payline.

There are three other high-paying symbols, represented by a trident, loot that is enshrined inside a claw-trap and there is a purple brew that can do god-knows-what to you, but I'd say probably gets you woozy beyond knowing your speech from your locomotives.

It all looks too perfect. So what's the catch? Is there a catch? Well, you are in Lucky Little Devil's house so the awesome payouts are balanced out by high volatility and a low hit rate. This means your winning outcomes will have a tendency to post for low-paying symbols and they'll be further apart.

But not all is so gloomy. I did have a slots experience that justified the money and time that I spent on this game because the reel modifiers can come into play often and the free spins bonus may turn into a free spins galore.

Here is the breakdown. I like the game and I'll probably return to play it again in the time ahead when I choose to play a highly-volatile slot. Those of you who don't mind forgoing small returns for a chance to win a big prize will find Lucky Little Devil a thing to explore.

Browse casinos with Lucky Little Devil and other slots from Red Tiger. Create an account and try the game for free before making a deposit.

You can play Lucky Little Devil in English, Finnish, Swedish, German and 18 other languages. 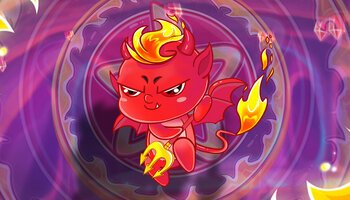